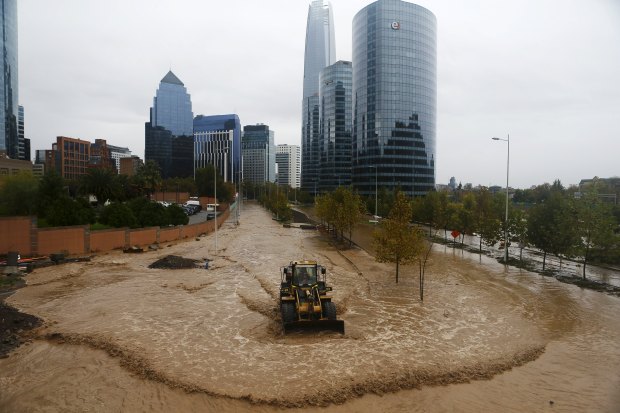 Santiago: Heavy rains battered central Chile over the weekend, leaving one person dead, seven missing and millions without drinking water as landslides caused havoc and rivers breached their banks. A woman was killed by a landslide in the San Jose de Maipo valley, a mountainous region just southeast of the capital, Santiago, while police suspended the search for three people who disappeared in a landslide in the same area.

Police said they would resume their search at sunrise on Monday, when more rain is expected. In total, seven people have gone missing, 95 homes have sustained major damage and about 80,000 people are without electricity, said Chile emergency office Onemi. Over the past four days, Santiago has seen about 3 inches (80 mm of rain), nearly five times the amount it normally gets for the whole month of April, said Cristobal Torres, meteorologist with the state meteorology service.

Light showers are forecast for Monday before stopping on Tuesday morning, said Torres. Dirt and debris from the surrounding Andes mountains were washed into Santiago's potable water supply. An estimated 4 million people suffered cuts to their water supply and authorities asked residents to stock up on drinking water, prompting a rush on bottled water at the city's supermarkets.

The heavy downpours also led global miner Anglo American Plc and state-owned producer Codelco to suspend operations at two major copper mines. Many schools in Santiago and nearby coastal towns suspended classes for Monday, while streets in some parts of the city become overrun by floodwaters after the Mapocho River breached its banks.