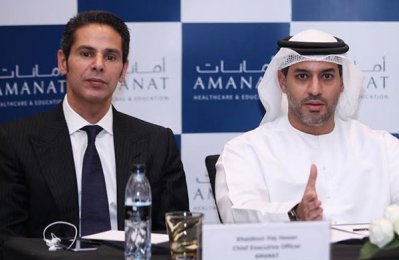 Amanat Holdings, a top healthcare and education company, has acquired a 16.02 per cent stake in Madaares, a leading provider of K-12 primary and secondary education in the UAE, for Dh139.4 million ($37.95 million).

Through acquiring this stake, Amanat is now among Madaares five largest shareholders, a statement said.

Founded in 2004, Madaares offers premium education across multiple curricula, including British, American and International Baccalaureate. For the academic year 2014-2015 it operated four nurseries and six schools in the UAE which are rated as “Good” and “Very Good”, as per Dubai Schools Inspection Bureau (DSIB) and ADEC’s Irtiqa’a Inspection. Recently, Madaares further increased its student capacity following the opening of a new school in the third quarter of 2015.

Faisal Bin Juma Belhoul, chairman of the Board of Amanat, said: “The macroeconomic and socio-demographic environment for K-12 education sector continues to be favourable and we look forward to working alongside the Madaares shareholders to drive growth and deliver value for all stakeholders.”

Madaares’s six schools have a combined student enrolment of over 6,900 and its operations are closely integrated, with the large majority of nursery students progressing to one of the group’s secondary schools.

Khaldoun Haj Hasan, CEO of Amanat, said: “The private K-12 education sector in the UAE is expected to grow annually by 9 percent through to 2020 and we at Amanat believe strongly in the long-term prospects of Madaares. As a value added investor, we look to support businesses by working with management to enhance corporate governance, develop a differentiated corporate strategy and identify the most optimal finance structure for the business.” – TradeArabia News Service