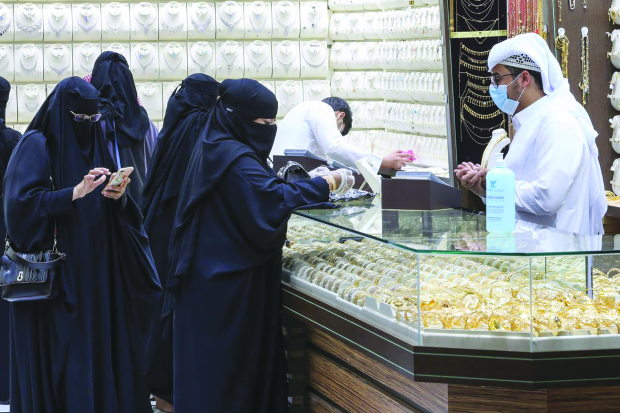 Saudi women buy jewellery in Riyadh ahead of VAT increase

RIYADH: People in Saudi Arabia rushed to buy goods from imported fruit juices to cars ahead of a sharp increase in Value Added Tax (VAT) today.

The tripling of VAT to 15 per cent comes against a backdrop of lower consumer spending and an easing of inflation due to a three-month coronavirus lockdown that was fully lifted on June 21.

Supermarkets in the capital Riyadh were packed over the weekend as shoppers stockpiled non-perishable goods. Furniture and appliances stores offered discounts to lure buyers.

“Demand has been very weak but people are now actively buying ahead of the VAT so there is a bit of demand,” said Najem Alotaibe, a car dealer in Riyadh.

Jaber Al Sahari, who works in a gold shop, also reported an increase in demand in the last two weeks.

Saudi Arabia announced the VAT increase and suspension of a cost of living allowance in May.

“Life is getting more expensive. I bought some imported food and juices and stored it because prices will rise,” said Sarah, a Saudi mother of two.

In recent months inflation eased to around 1pc due to low demand for non-food items and reduced fuel prices, but some analysts expect it to surge by up to 6pc year-on-year in July due to the VAT increase.

Authorities increased import tariffs to contain a ballooning fiscal deficit, which the International Monetary Fund projects at over 12pc of GDP from 4.5pc last year.

These steps could reduce the overall deficit by 4.5pc to 6pc of GDP, but may dampen economic recovery, Arqaam Capital has said.

For Abu Omar, an Egyptian expatriate, the VAT increase comes on top of a 20pc salary reduction due to the coronavirus crisis.

“So now I have to live with 35pc less, this will be very difficult with three children,” he said.