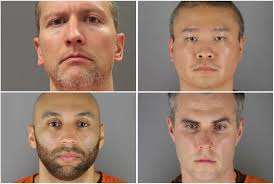 The former Minneapolis police officers charged in the death of George Floyd will likely seek to relocate their trials in hopes of finding sympathetic jurors, but legal experts said doing so could reinforce claims of systemic racism in the justice system.

While trials are rarely moved in Minnesota, legal experts said the Floyd cases might be exceptions because the Minneapolis police chief and other officials spoke publicly about the episode and called Floyd’s death a murder, a departure from norms that defendants may argue prejudiced jurors.

A video of the May arrest and death of Floyd, who was Black, showed officer Derek Chauvin, who is white, kneeling on Floyd’s neck for nearly nine minutes as he went lifeless, sparking protests globally and igniting a national discussion on race.

Chauvin is charged with second-degree murder, and the three other former officers, who are white, Black and Asian American, are charged with aiding Chauvin.

In addition, while it might be hard to find jurors anywhere who have not seen the video, demonstrations in Minneapolis against police brutality could arguably intimidate local jurors, experts said.

In a Minneapolis court on Monday, Hennepin County District Court Judge Peter Cahill said he might consider in September arguments to move the case, which goes to trial in March. If the cases were moved, the new venue would be another Minnesota county as the charges are under state law.

In several high-profile, racially charged cases in the past juries were more lenient with defendants of the same race as the majority of jurors.

“If you go to a less diverse place, what that would mean for the diversity of the jury pool and the question of bias?” asked Justin Hansford, director of the Thurgood Marshall Civil Rights Center and professor at Howard University School of Law.

When defence attorneys have convinced judges to move trials from the jurisdictions of the crimes, those rare cases usually were marked by frenzied media coverage that judges agreed made finding an impartial local jury impossible.

Former football star O.J. Simpson, who is Black, was acquitted on double murder charges in 1995 by a downtown Los Angeles jury, comprised of nine Blacks, two whites, and one Hispanic person, after the case was moved from nearby Santa Monica, where the crime occurred and the population is majority white.

“The (OJ) Simpson case teaches us that venue can be the difference between an acquittal and a conviction,” said defense attorney Brian McMonagle, who defended comedian Bill Cosby in his first sexual assault trial.

Earl Gray, a lawyer for Thomas Lane, one of the former officers charged in Floyd’s death, told Reuters that if Minneapolis officials continued to describe the case as a murder he expected the judge to move the trial.

Lawyers for the other officers and the Minnesota attorney general who is prosecuting the case declined to comment or did not respond to a request for comment.

“They have got to get this moved,” said Paul Applebaum, a Minnesota attorney, referring to the defense team. He said if they get a jury with mostly minority jurors, “they are cooked.”

While ordering a new venue may be necessary to protect the defendants’ rights of due process and impartial jury, moving trials involving police defendants to less diverse areas has stirred allegations of injustice in the past.

Four white New York City police officers were charged in the 1999 death of Amadou Diallo, a Black man. The shooting touched off days of protests.

The trial was moved to Albany County, New York by an appellate court that ruled Bronx jurors would be “under enormous pressure to reach the verdict demanded by public opinion.”

The officers were acquitted by a jury of four Blacks and eight whites. Albany County is almost three-quarters white while whites and Blacks are about equal in Bronx County, both around 44% of the population.

The 1992 trial of four Los Angeles police officers accused of using excessive force in the arrest of Black motorist Rodney King, which like Floyd’s arrest was caught on video, was moved to suburban Ventura County from Los Angeles.

None were found guilty by the mostly white jury, sparking widespread protests.