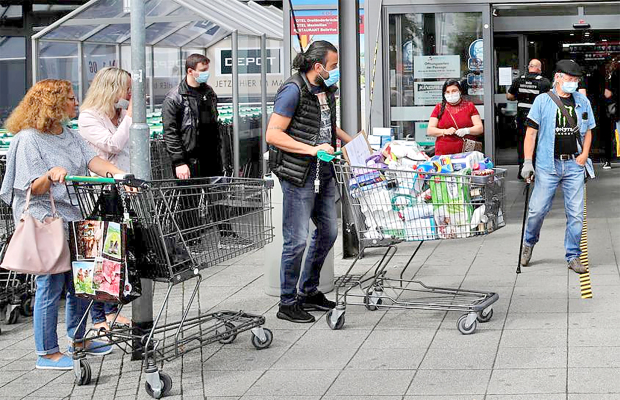 LONDON: Euro zone business activity grew in July for the first time since the coronavirus pandemic hit, as more parts of the economy that were locked down to curtail its spread reopened and people emerged from their homes to work and spend money.

Across the world almost 15.5 million people have been infected by the coronavirus but as the rate of infections has eased across much of Europe, governments have loosened some restrictions.

That unleashing of pent-up demand pushed IHS Markit’s flash Composite Purchasing Managers’ Index (PMI), seen as a good indicator of the bloc’s economic health, to 54.8 in July from June’s final reading of 48.5, its highest since mid-2018 and well ahead of the 51.1 forecast in a Reuters poll.

“The sharp rise... is an encouraging sign that the economic recovery continued at a decent pace. But we suspect that activity will remain below pre-crisis levels for at least the next couple of years,” said Jack Allen-Reynolds at Capital Economics.

The headline index had been below the 50 mark which separates growth from contraction since March so a return to positive territory will be welcomed by policymakers and governments who have pumped trillions of euros into the economy.

European Union leaders agreed a 750 billion euro pandemic recovery fund on Tuesday and with European Central Bank monetary policy expected to stay ultra-loose for a long time, optimism about the year ahead improved.

Markets are still expecting a V-shaped recovery – as are some economists – but while yesterday’s data indicated a bounceback of sorts, it is unlikely to support those views.

“A V-shaped recovery seems quite unrealistic, despite the encouraging numbers,” said Bert Colijn at ING.

French business activity rebounded far more than expected as a post-lockdown recovery in the service sector shifted up a gear, PMI data showed.

Manufacturing activity in Germany stabilised, avoiding a contraction for the first time in 19 months, giving hope for a recovery from a long recession exacerbated by the pandemic.

Meanwhile, British businesses, outside the euro zone, experienced the fastest upturn in five years during July as more of the economy reopened and shoppers pushed their spending back up to within a whisker of pre-lockdown levels.

Official data showed Britain’s economy shrank more than 25pc in March and April, and recovered less than expected in May. A Reuters poll this week suggested the economy would contract more than 9pc this year.

As demand increased, euro zone firms cut their headcount at a shallower rate and purchasing managers were at their most optimistic since February, just before Europe began to feel the full brunt of the pandemic.

The manufacturing industry also returned to growth with the factory PMI rising to 51.1 from 47.4, its first time above breakeven since January 2019 and ahead of predictions.