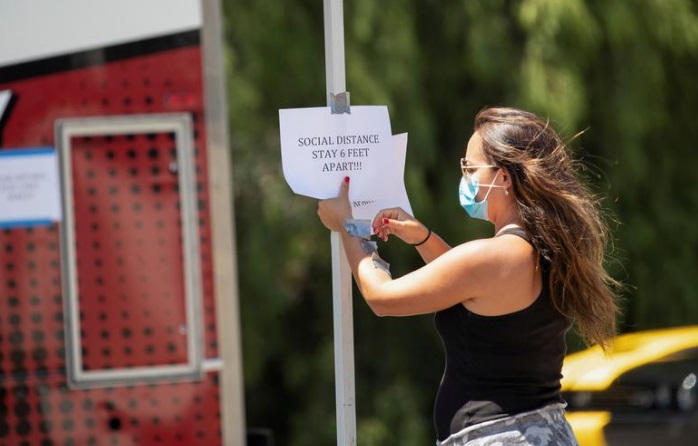 FILE PHOTO: A person places a sign reminding about social distancing on the set of the film "7th & Union" during the outbreak of the coronavirus disease (COVID-19), in Pomona, California, U.S., July 8, 2020. REUTERS/Mario Anzuoni

Los Angeles: As home-bound audiences eagerly await new programming during the coronavirus pandemic, Hollywood has been slow to get cameras rolling again, even with quarantined sets and innovations.

Only a fraction of movie and TV productions have resumed filming in Los Angeles and elsewhere in the United States, where coronavirus cases are rising.

Actors and crew members are unsure when projects might resume, and some expect they will not return to work until 2021.

Los Angeles County, home to the biggest movie and TV studios, gave a greenlight in June for filming to resume with safeguards.

Major unions issued a 36-page report outlining safety measures. Producers had hoped to have many sets working again in August.

The number of film permit requests in the Los Angeles area since mid-June ran about 34 percent of normal.

Most of those were for commercials or still photography, according to local organisation FilmLA, which said it expected scripted TV and feature film production to pick up in September.

Actor Seth Rogen, who produces TV series and movies with partner Evan Goldberg, said he is exploring international locations, including Bulgaria, for some projects.

“I am not ambitious that any filming is going to be happening in America anytime soon in a way that I’m comfortable with,” Rogen said in an interview this month. “I look to other countries who have dealt with this whole thing much better and think maybe, if they’ll let us in, maybe we can film there.”

The next “Jurassic World” dinosaur adventure from Comcast Corp’s Universal Pictures restarted filming in London, and the cast of Walt Disney Co’s “Avatar” sequels is back at work in New Zealand.

To restart, producers must adapt the industry guidelines to their situations, which takes longer for bigger projects.

The union has cleared more than 1,000 return-to-work plans for film and TV projects, he said, adding that the current production level was “far lower” than normal.

Lingering shutdowns will limit the supply of fresh programming that TV networks and streaming services can offer even as many viewers remain home-bound during the pandemic.

“You want a ‘Boys’ season three? They are not going to let us shoot unless we get the numbers down,” star Jack Quaid said.

Some TV series have pushed ahead with protections including smaller crews, safety officers to monitor compliance with infection-prevention measures and inventive fixes.

Producer Tyler Perry created a “Camp Quarantine” at his Georgia studio complex to film his BET series “Sistas” in July.

No coronavirus cases were detected during a two-week shoot, Perry said.

ViacomCBS, owner of MTV, Comedy Central and other channels, is setting up closed sets called “COVID compounds” to isolate people working on series such as “RuPaul’s Drag Race,” said Chris McCarthy, president of entertainment and youth brands at ViacomCBS.

In the compounds, “we will control it, we’ll test, but we’ll also contain it and keep everyone as safe as possible,” McCarthy said.

A few productions have reported positive coronavirus tests to SAG-AFTRA, Crabtree-Ireland said, declining to name them.

Some temporarily paused production for contact tracing and other steps, he said.

Others were caught before the person had reported to set.

“In our view, it’s a sign the system is working,” he said.