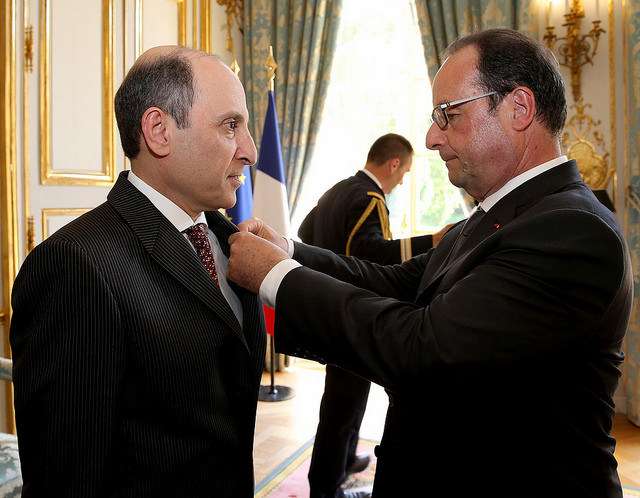 According to a press release by Qatar Airways, the prestigious award was given to Mr Al Baker for his leadership in the aviation industry and for spearheading Qatar Airways to be a leading global airline.

This is the second honour Mr Al Baker received from the Republic of France. Earlier, he was awarded by the French Minister of Transport in Qatar in 2002 during the World Travel and Tourism Summit. The ‘Officier de la Legion d’Honneur’ is of higher distinction and builds upon the initial Chevalier Honour, by virtue of the Republic of France.

The press release also added that Mr. Al Baker was commended for his vigour and leadership in spearheading a legacy of collaboration between Airbus and Qatar Airways – a first for the industry – where there has been a highly intricate level of coordination between design and implementation by the manufacturer and operator. The high quality product and service delivery presented on each Qatar Airways flight was also recognised for the standards and advancements it has made in hospitality, for each of its guests on board.

The long and historic relationship between France and the State of Qatar was noted, particularly as Qatar Airways has been a long-standing supporter of one of France’s great establishments – the aircraft manufacturing giant, Airbus – of which Qatar Airways is the only airline in the world to fly each Airbus aircraft type in its fleet.

Accepting the honour, Mr. Al Baker said, "France is a country that I admire for its ingenuity, grandeur and long legacy of craftsmanship of the highest calibre.

“I humbly accept this Honour with immense pride and great appreciation to the people and culture of France in all of their contribution to Qatar Airways, the national airline of my country."