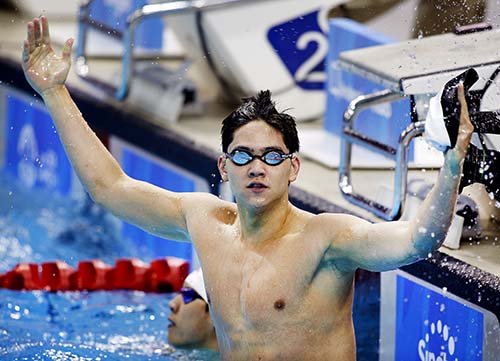 Schooling showed why he’s considered a medal prospect at next year’s Olympics when he swam a Games record 100m freestyle of 48.58sec, and then led the way as Singapore lowered the event’s 4x200m mark.

It capped another strong day for the hosts as they finished the second full day at the 11-nation, 36-sport competition top of the medals table on 26 golds, five clear of Vietnam.

But it was also a day of grief for the tiny city-state after news that at least eight Singaporeans, including six schoolchildren, died in Friday’s earthquake on Mount Kinabalu in Malaysia.

SEA Games venues will hold a minute’s silence and flags on government buildings will fly at half-mast today, which has been declared a day of national remembrance.

“They’re going to be in the back of my mind and tomorrow I’m going to swim for all those eight people that died, along with the Malaysians also.”

Singapore was also jolted by news that sepaktakraw player Muhammad Azreen Sairudin was seriously injured in a motorbike crash which killed his brother, who was riding pillion.

Today, Schooling will swim the 50m freestyle and the 200m butterfly as he pursues a sweep of nine gold medals as part of his preparations for the July-August world championships.

The Philippines won the rugby sevens, beating Malaysia 24-7 in the final, and Singapore edged Malaysia 46-43 to win their first netball gold.

Thai runner Natthaya Thanaronnawat won the women’s race by a more comfortable margin in 3:03:25, crossing 74 seconds before Mary Joy Tabal of the Philippines.

With more than a quarter of the 402 gold medals decided, Singapore remain on top with their 26 – although Vietnam (21) and Thailand (20) are close behind.