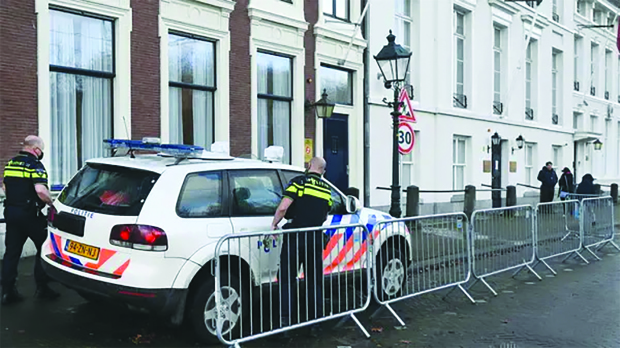 Police officers stand near the Embassy of Saudi Arabia after unidentified assailants sprayed it with gunfire, in The Hague, Netherlands November 12, 2020. (Reuters)

THE HAGUE: Dutch police arrested a man yesterday on suspicion of being involved in the shooting at Saudi Arabia’s embassy in The Hague, causing damage but no injuries.

“The police arrested a man from Zoetermeer (40) on Thursday afternoon, November 12 at around 2.15pm on suspicion of involvement in the shooting incident at the Saudi Arabian embassy,” The Hague police said in a statement.

“On Thursday morning, multiple shots were fired at the embassy building on Koninginnegracht in The Hague. Nobody was injured,” it added.

“The police immediately started an extensive investigation and formed a so-called large-scale investigation team. Investigation led to the Zoetermeer suspect. The man was arrested in a house in Zoetermeer. Police officers also confiscated a passenger car for further investigation. The suspect is detained and will be questioned.”

The police found several bullet casings outside the embassy and bullet holes in the window of the building, they said.

The Saudi embassy confirmed none of its staff were hurt.