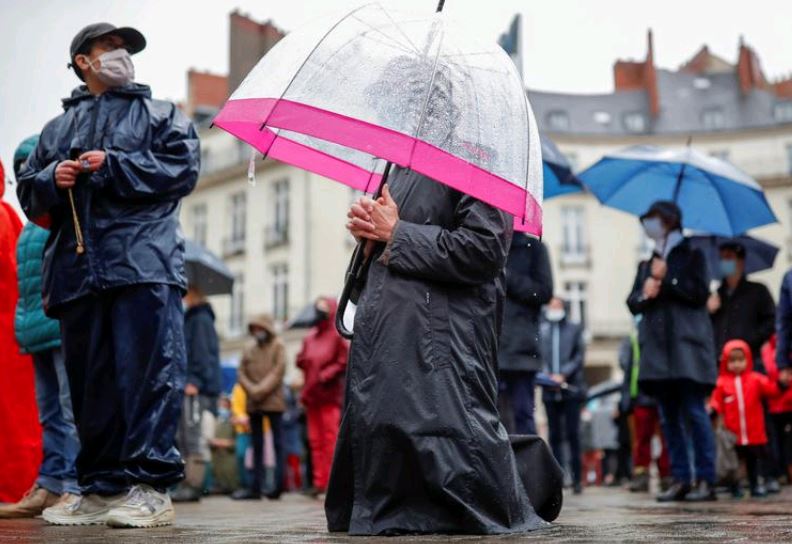 Parishioners wearing protective face masks pray at Graslin square during an open air mass in Nantes, as public masses are suspended during the second national lockdown as part of the measures to fight a second wave of the coronavirus disease (COVID-19), in France, November 15, 2020. REUTERS/Stephane Mahe

The International Olympic Committee’s chief said he was confident Tokyo could host spectators at the postponed Games, while two more US states imposed new curbs on gatherings as the country’s total Covid-19 cases crossed 11 million on Sunday.

Germany’s federal government and states are considering new measures to halt the rise in infections, such as dramatically reducing the number of people at household gatherings and compulsory mask wearing for school students.

Britain said on Monday it will open two new “mega” laboratories in early 2021 for carrying out Covid-19 tests, a day after Prime Minister Boris Johnson went into self-isolation after coming into contact with someone who tested positive for the virus.

Catholics held an open-air mass in the western French city of Nantes on Sunday to protest against Covid-19 restrictions, under which masses are banned in churches.

The new coronavirus was circulating in Italy since September 2019, a study showed, signalling that Covid-19 might have spread beyond China earlier than previously thought.

Brazil’s health ministry said it had taken the system used to report Covid-19 case numbers and deaths offline in recent days to protect against a suspected cyber attack.

A member of the International Monetary Fund mission in Argentina has tested positive for Covid-19, forcing the team to isolate and conduct next week’s meetings online.

Tennis Australia will schedule all of its summer tournaments in the southern state of Victoria, while the country went back on an outbreak alert following 14 new cases in South Australia on Monday.

Iranian President Hassan Rouhani on Sunday declared “the general mobilisation of the nation and the government” to confront the third wave of the coronavirus.

Algeria will reimpose restrictions to combat the spread of Covid-19 from Nov. 17, including closing gyms, cultural centres, leisure venues and used car markets.

Istanbul’s mayor called on Saturday for a lockdown of at least two weeks to contain an “out of control” rise in coronavirus cases.

Johnson & Johnson launched a new late-stage trial in Britain on Monday to test a two-dose regimen of its experimental Covid-19 vaccine among thousands of volunteers.

A Hungarian village firm with five employees is making antibodies to detect the new coronavirus and its toxic byproducts for nearly the entire global drug industry.

Medical costs of German Covid-19 patients who have left hospitals are on average 50% higher than before they were admitted, data from a major insurer showed.

Japan’s economy grew at the fastest pace on record in the third quarter, rebounding sharply from its biggest postwar slump, as improved exports and consumption showed the country is recovering from damage caused by the pandemic.

China’s industrial output rose at a faster-than-expected pace in October, while retail sales continued to recover albeit at a slower-than-forecast pace as the world’s second-largest economy emerged from its Covid-19 slump.