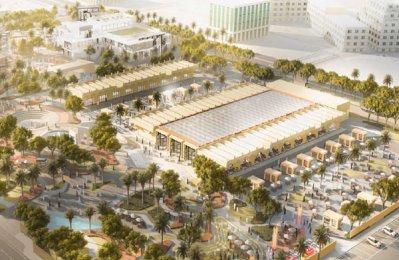 Saudi Arabia's Ministry of Municipal and Rural Affairs Eastern Province Municipality has invited expressions of interest (EOIs) for the development of Phase One of Pulse of Al-Khobar, an integrated cultural centre in the heart of Al Khobar region in the Eastern Province.
The scope of work for Pulse of Khobar Project includes development of a souq within the Al Olaya neighbourhood located in the heart of Al Khobar district. The project is being implemented in cooperation with the Ministry of Culture.
Minister of Culture Prince Badr bin Abdullah bin Farhan said the project seeks to develop and activate the old market place of Al Khobar and turn it into a permanent platform for cultural activities in various sectors."
"It aims to establish a cultural incubator for talented people in cultural sectors such as theatre and performing arts, music, visual arts, and culinary arts," said Prince Badr.
On the choice of the project site, the minister said Al Olaya neighbourhood was selected for its strategic location as it has the potential to become a future hub for tourism, culture and arts in Al Khobar, in addition to diversifying investment opportunities, creating opportunities for small and medium enterprises, and increasing investment opportunities therein.
The project, which will benefit from the old market buildings, will include markets and spaces for sports, exhibitions for plastic arts, places dedicated for free crafts, areas dedicated to teaching arts for children and amateur artists, in addition to studios for artists, art cafes, a specialised area for musical instruments and their maintenance and other periodical musical performances, he explained.
The project also includes area to develop children’s vocal performance capabilities and music education, public squares that include an open theatre, and facility for visual arts in addition to areas for selling new and second hand books, area for displaying archaeological copies, an interactive area for teaching book production and binding, and a library area.
The Pulse of Khobar will also be home to a mini farmers’ market in addition to a library specialised in culinary arts, restaurants, cafes, places to eat and drink, in addition to an area for organic products.
Acting Minister of Municipal and Rural Affairs Majed Al Hoqail said: "Through this project we aim to turn this place into the beating heart of culture and arts of the city with the support of cultural bodies and in economic and operational partnership with stakeholders in the government sector, including secretariats and municipalities."
The project aims to raise the quality of life in the Eastern Province, by building an artistic and heritage destination open to various cultural activities that will have a positive impact on the Al Khobar residents lifestyle and visitors to the eastern region, he added.-TradeArabia News Service