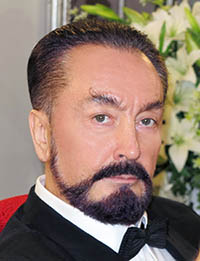 The Almighty Lord promises eternal heaven to His righteous servants and gives detailed descriptions of the wonderful life that awaits them. In the land of ceaseless happiness and beauty, believers will have everything their hearts desire while sorrow and grief leave them forever.

By the grace of God, we are, to an extent, able to picture the beauty of life in heaven. For instance, the verse that reads: “In it there are rivers of water that will never spoil, and rivers of milk whose taste will never change, and rivers of wine, delightful to all who drink it, and rivers of honey of undiluted purity” (Surah Muhammad, 15) makes it clear that beauty of paradise is beyond imagination.

Muslims throughout history have striven to emulate those beauties on Earth in an attempt to glorify the name of God. As a result of this noble ambition, Muslim civilisations from Ottomans to Al Andalus, and from Abbasids to Iran have been able to produce some of the most incredible art the world has ever seen.

The blue mosque in Istanbul, the Nasir ol Molk Mosque in Iran, the legendary gardens of Alhambra Palace and Taj Mahal are only a few of those architectural wonders inspired by the beautiful descriptions of heaven in Quran.

Since gardens are given a particular mention in Quran, Muslim architects paid special attention to their gardens and produced exquisite designs based on the descriptions they found in the holy book of Islam. Alhambra Palace and its magnificent gardens in modern-day Spain is a grand example.

Under the Caliphate of Córdoba, Al Andalus was a beacon of culture and the city of Cordoba shone as a cultural and economic centre in Europe. The civilisation was so advanced; many intellectual achievements that propelled humanity forward, such as trigonometry, astronomy, surgery and pharmacology, came from this part of the world. At a time when Europe was grappling with the darkness of the Middle Ages, the Muslim civilisation of Al Andalusia thrived and prospered.

Unsurprisingly, Al Andalusia had some of the finest examples of garden landscaping. The elements of flowing water, shade and lush greenery that were amply used were drawn from the descriptions of heaven in Quran.

In Quran, our Lord refers to gardens underneath which rivers flow. In Alhambra, Granada, the Nasrid dynasty designed a beautiful series of magnificent courtyards that sought to create such scenes as much as possible in worldly terms. In these courtyards, water was always at the centre.

The Court of Myrtles, a large pool bordered by myrtle hedges, and the Court of Lions, with its exquisite fountain, are just two examples. The gardens that extend from the courtyard form another series of courtyards.

However, they were made not by walls, but by hedges and trees, effectively creating secluded areas, as yet another attempt at emulating gardens of Paradise. Rose, jasmine and violet gardens and orchards were common sights. Fig, pomegranate, cherry, citrus, peach and almond trees with their abundant blossoms and fruits played important roles in gardens inspired by descriptions of heaven in Quran.

Despite these impressive achievements of Muslim civilisations, today’s Islamic countries paint a completely different picture. Stagnation, radicalism, poverty, and backward societies dominate the majority of the Islamic landscape. No doubt this is mainly due to Muslims’ abandonment of Quran, which effectively deprived them of all the beauties Quran provided, including the refreshing and authentic art insight.

Nevertheless, it is never too late to correct mistakes and return to the essence of our beautiful religion. Once the Muslims embrace the real Islam in Quran, abandon the superstitions that give rise to radicalism and bigotry, they will rise stronger than ever. When that happens, there is no doubt that the art and culture that was once envied by the world will shine once again.