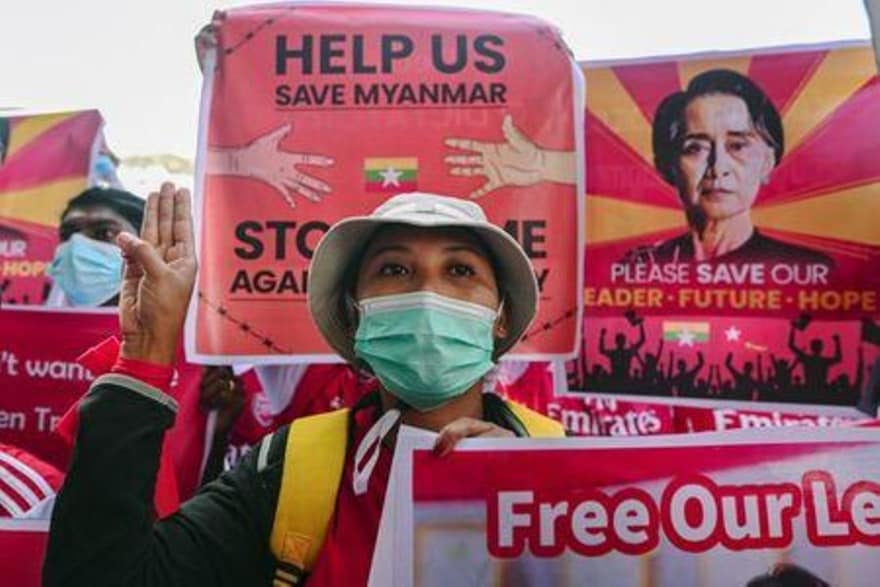 A demonstrator flashes a three-finger salute while holding a sign to protest against the military coup and demand for the release of elected leader Aung San Suu Kyi, in Yangon, Myanmar, February 12, 2021. REUTERS/Stringer reuters_tickers

Security forces carried out another series of arrests overnight, with those detained including at least one doctor who had taken part in an escalating civil disobedience campaign.

Social media giant Facebook said it would cut the visibility of content run by Myanmar’s military, saying they had “continued to spread misinformation” after seizing power in the Feb. 1 coup.

In the biggest city Yangon, hundreds of doctors in white duty coats and scrubs marched past the golden Shwedagon pagoda, the country’s holiest Buddhist site, while in another part of town, football fans wearing team kits marched with humourous placards denouncing the military.

Soldiers broke up a protest in the southeastern town of Mawlamyine and arrested several people. In the coastal town of Dawei, the streets were crowded with protesters giving fiery speeches, many carrying red flags with peacocks, a national symbol of pride and resistance.

Thousands also gathered in Myitkyina, the capital of the far northern Kachin state, with young men playing rap music and staging a dance-off.

In the capital of Naypyitaw, some demonstrators put sheets over their heads and dressed as ghosts with sunglasses under the scorching sun. One carried a placard saying “Not all ghosts are scary. But the Burmese police are more frightening”.

As Washington announced sanctions, European Union lawmakers on Thursday called for action from their countries and Britain said it was considering measures to punish the coup leaders.

Supporters of Suu Kyi’s National League for Democracy (NLD) welcomed the U.S. sanctions but said tougher action was needed to force the military to release Suu Kyi from house arrest and recognise the NLD’s landslide victory in November elections.

“We are hoping for more actions than this as we are suffering every day and night of the military coup here in Myanmar, ” Suu Kyi supporter Moe Thal, 29, told Reuters.

“We want to finish this ASAP. We may need more punishment and action against Myanmar’s acting president and generals.”

The coup has prompted the biggest demonstrations since a 2007 ‘Saffron Revolution’ that ultimately became a step towards now halted democratic change.

Friday’s protests marked the seventh consecutive day of protests, including one on Thursday outside the Chinese embassy where NLD supporters accused Beijing of backing the junta despite Chinese denials.

The junta remitted the sentences of more than 23,000 prisoners on Friday, saying the move was consistent with “establishing a new democratic state with peace, development and discipline” and would “please the public”.

Among the prisoners released was influential ethnic leader Aye Maung from the western state of Rakhine. He and writer Wai Hin Aung were arrested in 2018 over allegedly speaking favorably of the Arakan Army, one of the country’s most powerful ethnic armed groups. They were both found guilty of high treason and sentenced to 20 years in prison.

The military launched the coup after what it said was widespread fraud in the Nov. 8 election, although the electoral commission has said the vote was free and fair.

Nobel Peace laureate Suu Kyi, 75, was swept to power following a historic election victory in 2015. She now faces charges of illegally importing six walkie-talkie radios and has not been seen in public since the coup.

The U.S. sanctions target 10 current and former military officials deemed responsible for the coup, including Min Aung Hlaing. It also blacklisted three gem and jade companies it said were owned or controlled by the military.

Min Aung Hlaing and other top generals are already under U.S. sanctions over abuses against Rohingya Muslims and other minorities, and some analysts question whether the latest penalties will have much effect.

Derek Mitchell, former U.S. ambassador to Myanmar and president of the Washington-based National Democratic Institute, said U.S. sanctions alone would have little impact on Myanmar’s generals without “tough messages” from U.S. partners such as Japan, Singapore and India.“Min Aung Hlaing had already been sanctioned, so ... I don’t think he is concerned about the United States right now,” he said.

The U.N. Human Rights Council is due to discuss Myanmar at a special session on Friday.

The protests have revived memories of almost half a century of direct army rule, punctuated by bloody crackdowns, until the military began relinquishing some power in 2011.

The generals have promised to stick to the 2008 constitution and hand over power after elections, but on Friday the junta said it would “work for the emergence of a constitution that is in alignment and harmony with the Democratic Federal Union”.

No date has yet been set for elections.