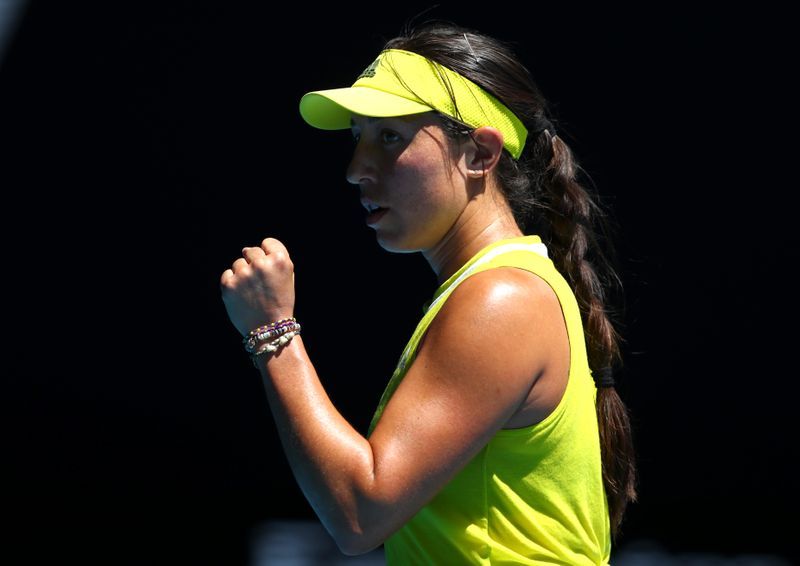 Jessica Pegula of the U.S. reacts during her fourth round match against Ukraine's Elina Svitolina (Reuters Photo)

Jessica Pegula continued her dream run at the Australian Open on Monday with a 6-4 3-6 6-3 win over fifth seed Elina Svitolina to set up an all-American quarter-final against Jennifer Brady, who beat Croatia's Donna Vekic in straight sets.

World number 61 Pegula has been one of the surprise packages in the women's draw, beating 12th seed Victoria Azarenka in her opening match before racing into the fourth round with quickfire wins over Sam Stosur and Kristina Mladenovic.

Pegula, who struggled in the second set, regrouped in the decider, breaking Svitolina in the fourth game before locking down her first win over a top 10 opponent.

"I'm just happy that I reset at the start of the third," Pegula told a news conference. "I definitely felt I was sliding off the rails a little bit.

"Was it the perfect match? No. I thought I served really well. That was important."

The 26-year-old Buffalo, New York, native, whose parents own the city's NFL and NHL franchises, almost gave up tennis after being sidelined by hip and knee injuries for significant spells.

She scribbled a note on the camera lens wishing luck to her friend Brady and explained afterwards how their friendship had been forged playing doubles at the Fed Cup.

"Jen is an awesome person," Pegula said. "We've all been pushing each other. Why not push each other into a quarter-final, then one of us be in the semis?"

Brady booked her place in the quarters with a ruthless 6-1 7-5 demolition of Vekic, who struggled with an injured right leg.

Vekic took a medical timeout at the start of the second set after being blitzed in the opener. She emerged with fresh strapping above and below her knee but was barely moving in the final two games.

With the score tied at 5-5 she surrendered her serve to love, a double fault handing Brady the chance to serve for the match.

The American made no mistake, sealing victory when Vekic fluffed a forehand.