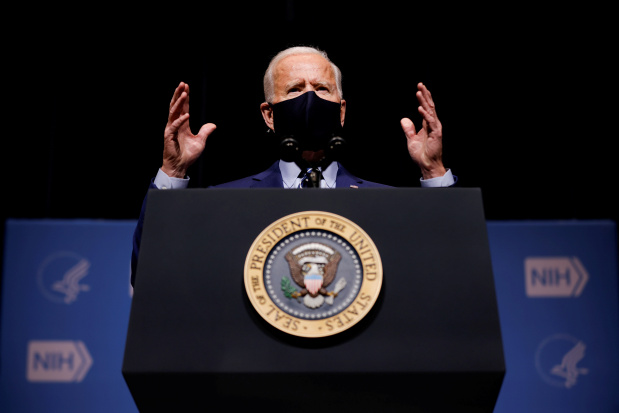 London: US President Joe Biden will attend his first meeting with Group of Seven leaders to discuss plans to defeat the coronavirus, reopen the battered world economy and counter challenges posed by China.

The Covid-19 pandemic has killed 2.4 million people, tipped the global economy into its worst peacetime slump since the Great Depression and upended normal life for billions.

Biden "will focus on the global response to the pandemic, including vaccine production, distribution of supplies" and efforts to fight emerging infections, White House spokeswoman Jen Psaki said on Thursday.

He "will also discuss the global economic recovery, including the importance of all industrial countries maintaining economic support for the recovery" and "the importance of updating global roles to tackle economic challenges such as those posed by China," Psaki said.

The call with G7 leaders at 1400 GMT is a chance for Biden, a Democrat who took over as president from Republican Donald Trump on Jan. 20, to project a message of re-engagement with the world and with global institutions after four years of his predecessor's "America First" policies.

Besides Biden, Italy's new prime minister, Mario Draghi, will be a new face at the leaders' virtual table, though he is famous for "doing whatever it takes" at the European Central Bank to save the euro during the European debt crisis.

Britain, which holds the rotating chair of the G7 and is trying to recast itself as a steward of the rules-based international system following Brexit, will ask members to help speed up the development of future vaccines to 100 days.

Prime Minister Boris Johnson is keen to build ties with Biden, who did not support Brexit and who, as a presidential candidate, last year publicly warned Britain against endangering peace in Ireland.

Johnson has said he is interested in the idea of a global treaty on pandemics to ensure proper transparency after the COVID-19 outbreak which originated in China.

The Biden administration will pledge $4 billion to a coronavirus vaccination programme for poorer countries in hopes of prying loose bigger donations from other governments, U.S. officials said on Thursday.

Britain, which has pledged 548 million pounds ($766 million) to the COVAX program co-led by the World Health Organization, will ask other G7 partners to give more.

China will also be on the agenda.

In his first major foreign policy speech as president, Biden cast China as the "most serious competitor" of the United States.

The United States will keep tariffs imposed on Chinese goods by the Trump administration in place for now, but will evaluate how to proceed after a thorough review, Treasury Secretary Janet Yellen said.

The G7 of the United States, Japan, Germany, United Kingdom, France, Italy and Canada has a combined gross domestic product of about $40 trillion - a little less than half of the global economy.