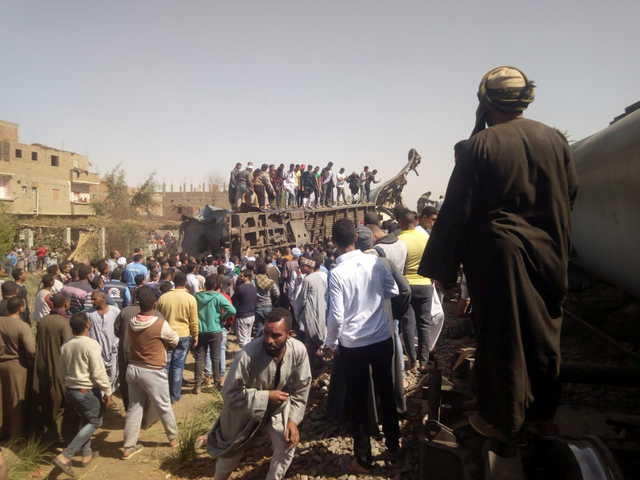 People inspect the damage after two trains have collided near the city of Sohag, Egypt, March 26, 2021. (Reuters Photo)

The collision happened after the emergency brakes on one of the trains, which were travelling in the same direction, were triggered by "unknown individuals", the rail authority said.

The brakes caused one of the trains to stop and the second to crash into it from behind, it said. The authority is conducting further investigations, it added.

Pictures on local media showed train carriages derailed, several of them badly damaged, above a channel of water.

The public prosecutor's office said it had ordered an investigation into the crash close to the Nile-side town of Tahta, about 365 km south of Cairo.

"The trains collided while going at not very high speeds, which led to the destruction of two carriages and a third to overturn," a security source told Reuters.

The health ministry said in a statement that 32 people had died and that dozens of ambulances were taking casualties to local hospitals. A health ministry spokesman said 84 people were injured.

Egypt has one of the oldest and largest rail networks in the region and accidents involving casualties are common.