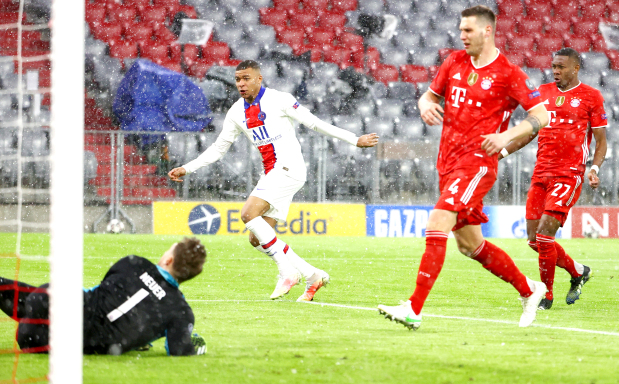 Mbappe fired in his eighth goal of the competition in the 68th minute after Eric-Maxim Choupo-Moting in the 37th minute and Thomas Mueller on the hour had cancelled out a two-goal PSG lead. It was Bayern’s first Champions League loss in more than two years.

PSG had stunned the hosts in the third minute through Mbappe, whose powerful low drive squeezed through the legs of keeper Manuel Neuer.

The French side were brutally efficient and scored with their second chance of the game when Neymar picked out Marquinhos with a pinpoint cross and the PSG captain beat Neuer in the 28th minute.

Choupo-Moting had headed onto the crossbar in the second minute but did better with another header in the 38th and Mueller brought the hosts level, nodding in a Joshua Kimmich free kick.

Mbappe scored from a quick counter-attack, however, and PSG survived late pressure from Bayern to hang on for victory ahead of next week’s return leg in Paris.

Meanwhile, superb individual goals from English pair Mason Mount and Ben Chilwell gave Chelsea a 2-0 win away to Porto in Seville as the Londoners made the most of their few chances.

Midfielder Mount ran on to an incisive pass from Jorginho then swivelled to get past a defender before firing the ball low and hard into the far corner to prise Porto open in the 32nd minute and score his first Champions League goal.

Porto, who knocked Juventus out in the last round, were more adventurous than the Premier League side and had triple the amount of shots, going closest with a header from veteran defender Pepe that was beaten away by Chelsea keeper Edouard Mendy, who also repelled an effort from striker Moussa Marega.

But Chelsea grabbed a crucial second away goal when Chilwell pounced on a slip by Porto’s Jesus Corona and dashed across the box to dribble his way into the net in the 85th minute, moments after team mate Christian Pulisic had rattled the crossbar.

The second leg on April 13 will also be played at Sevilla’s Sanchez Pizjuan stadium due to coronavirus restrictions on travel between Portugal and England.