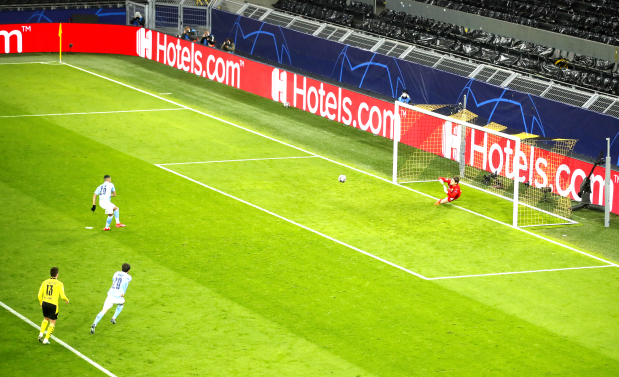 DORTMUND: Manchester City scored twice in the second half through Riyad Mahrez and Phil Foden to beat Borussia Dortmund 2-1 last night and reach the Champions League semi-finals for the first time in six years.

Real Madrid, meanwhile, moved into the semi-finals with a 0-0 draw with Liverpool at Anfield earning them a 3-1 aggregate win. The 13-times European champions will face Chelsea in the last four.

Foden, who scored City’s winner in their 2-1 first-leg victory, fired in off the post in the 76th minute after Mahrez had converted a 55th-minute penalty awarded for a handball by Emre Can to secure a 4-2 aggregate triumph.

Dortmund had gone ahead when striker Erling Haaland chased down a deep cross, the ball falling to Jude Bellingham and the teenager curling his shot into the top corner in the 15th minute for his first Champions League goal.

Premier League leaders City, eliminated in the quarter-finals of the competition in the previous three years, will face Paris St Germain in the semi-finals after the French champions knocked out holders Bayern Munich on Tuesday.

City manager Pep Guardiola reached his eighth Champions League semi-final as a coach, equalling Jose Mourinho, and his first with the English club.

The Spaniard had made seven changes from Saturday’s team that lost to Leeds United but it was Dortmund who looked fresher and went ahead through a fine strike by English teenager Bellingham who scored his first Bundesliga goal at the weekend.

City, faced with a fourth consecutive quarter-final exit, upped the tempo and Kevin De Bruyne rattled the post with a 25th-minute shot.

Mahrez was denied by Bellingham’s clearance as City took control of the game, but the Algerian did better 10 minutes after the restart when he converted his spot-kick.

Dortmund defender Can had also gifted City their opening goal in the first leg with a mistake.

The hosts tried hard to get back into the game and Mats Hummels’ 69th-minute header fizzed narrowly over the bar.

The Germans, however, were opening up more as they looked for the winner that would take the game into extra time and City found the space they needed to strike again.

De Bruyne forced a good save from Dortmund keeper Marwin Hitz in the 75th minute before Foden scored with the very next move to settle the tie.

Liverpool, the 2019 Champions League winners, created enough chances in the opening 45 minutes to have turned the tie around but they ran out of ideas in the second half.

Mohamed Salah and Georginio Wijnaldum had the best opportunities for Liverpool but failed to find the target and Real keeper Thibaut Courtois made every save he was forced into.

Real’s makeshift defence, without skipper Sergio Ramos and Raphael Varane, held firm after the break despite Juergen Klopp throwing on Diogo Jota into a four-pronged attack.