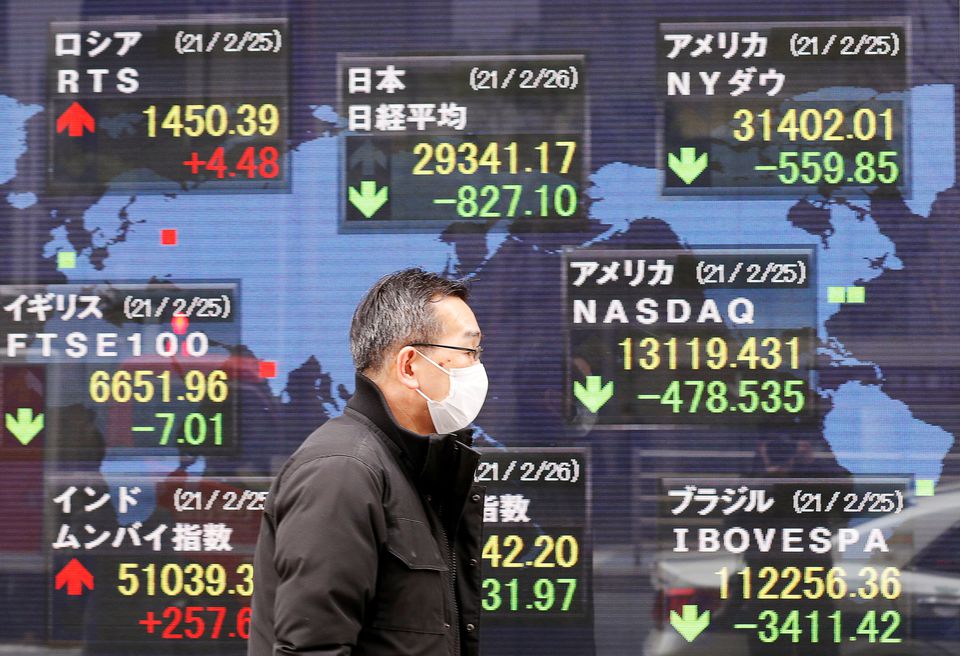 A man walks past a stock quotation board at a brokerage in Tokyo, Japan February 26, 2021. REUTERS/Kim Kyung-Hoon

Asian shares fell and U.S. stock futures were steady on Tuesday as caution ahead of a U.S. Federal Reserve meeting and a slew of corporate earnings offset growing optimism about the global economic recovery from the Covid-19 blow.

Oil rebounded in Asian trading after major oil producers stood by their demand forecasts, but there are still downside risks due to surging Covid-19 cases in India, the world's third-biggest oil importer.

Analysts said some investors may be taking profits on equities, but the sentiment remains positive due to rising coronavirus vaccination rates in many countries.

"The global economy is likely to continue to strengthen and many advanced economies are heading for a reopening due to progress in vaccinations."

However, despite the hopeful signs, a bullish session on Wall Street failed to inspire Asian markets. The S&P 500 and Nasdaq closed at record highs on Monday, fuelled by heavyweight growth stocks ahead of a deluge of earnings reports this week. The Dow Jones Industrial Average ended 0.18% lower.

In extended trade, Tesla dipped about 0.4% even after the electric car maker beat Wall Street expectations for first-quarter revenue.

Sentiment for equities in many markets has improved steadily this month due to expectations that rising vaccination rates will allow more economies to resume normal activity.

However, one area of concern is India, which is struggling with a surge of coronavirus infections that has overwhelmed its healthcare system.

Many investors stuck to the sidelines ahead of a Fed meeting ending Wednesday, where the U.S. central bank is expected to confirm that it will maintain with its easy monetary policy to bolster the economy.

The Treasury saw very weak demand at a seven-year debt auction in February, which sparked a brutal market selloff across the globe. The notes also saw tepid, albeit improved, demand in March.

The dollar was hemmed into a narrow range as traders avoided taking out big positions before the bond auction and Fed meeting.

The yen traded near a seven-week high against the dollar before a Bank of Japan meeting ending later on Tuesday. No major changes are expected, but policymakers are likely to cut their consumer price forecasts.

US crude ticked up 0.26% to $62.07 a barrel, and Brent crude rose 0.29% to $65.84 per barrel, but the bounce in oil could be limited due to worries about the return of travel restriction in response to India's coronavirus surge.

Bitcoin was little changed at $53,851. The world's most popular cryptocurrency soared nearly 10% on Monday, after five straight days of losses, on reports that JPMorgan Chase is planning to offer a managed Bitcoin fund.

Bitcoin had slumped almost a fifth from its all-time high hit earlier this month.