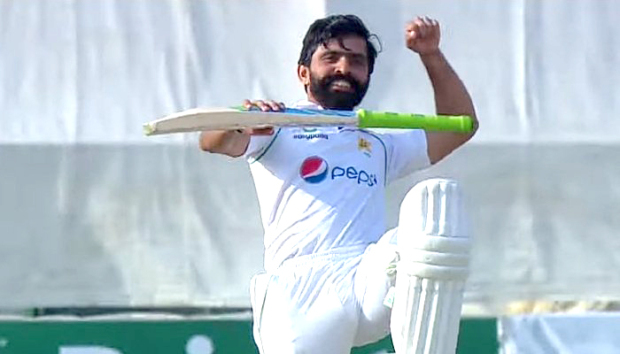 HARARE: Fawad Alam completed a fourth Test century as he guided Pakistan to 374 for six and a commanding lead of 198 runs at the close of play on the second day of the first Test against Zimbabwe at the Harare Sports Club yesterday.

The tourists are replying to their host’s modest first-innings score of 176 with unorthodox middle-order batsman Fawad, who takes a bizarre front-on stance at the crease, leading the way with an unbeaten 108 that has come from 155 balls on a slow wicket.

He has now reached a hundred on all four occasions that he has passed 50 in Test cricket and will resume on the third morning with all-rounder Hasan Ali (21 not out), who can be explosive at the crease and score quick runs.

Opener Imran Butt fell nine runs short of a first Test century following a patient 91 from 236 balls as he became a first scalp in the longer format for debutant seamer Richard Ngarava, having edged to wicketkeeper Regis Chakabva.

Fellow opener Abid Ali (60) also weighed in with a half-century but it was a day to forget for in-form captain Babar Azam as he was out first ball.

Babar pushed a delivery from seamer Donald Tiripano (3-89) straight to a short mid-on for a major breakthrough from the home side, but they could not capitalise on the fall of two quick wickets and are now facing a big first-innings deficit.