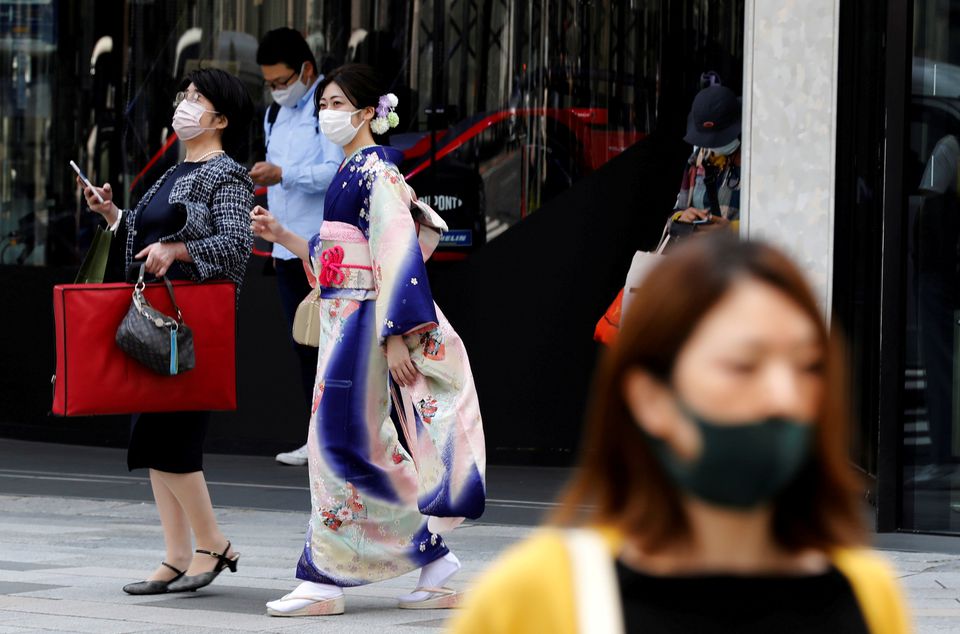 A woman in kimono clad and pedestrians wearing protective face masks, make their way at a shopping district on the first day of the country's third state of emergency, amid the coronavirus disease (Covid-19) outbreak, in Tokyo, Japan, April 25, 2021. (Reuters Photo)

TOKYO - Japan's government is set to extend on Friday a state of emergency in Tokyo and three other areas by about three weeks until the end of May to curb a surge in novel coronavirus cases just months before the start of the Tokyo Olympics.

The government had hoped a "short and powerful" state of emergency would contain a fourth wave of infection, but new cases in Tokyo and Osaka prefecture are still at high levels, said economy minister Yasutoshi Nishimura, who is also in charge of pandemic measures.

Extending the state of emergency to May 31 from May 11 will leave a margin of fewer than two months before the July 23 start of the Games, which were postponed a year due to the pandemic.

"Osaka particularly is in quite a dangerous situation with its medical system," Nishimura said on Friday at the start of a meeting with a panel of medical and economic experts, noting that variant strains are spreading rapidly.

"We have a strong sense of danger that Tokyo could soon be turning into the same situation as Osaka."

All hospital beds for critical patients in Osaka prefecture are occupied, public broadcaster NHK reported on Friday, and Nishimura said the medical situation in neighbouring Hyogo prefecture, where the city of Kobe is located, was also poor.

In Tokyo, there were 907 new cases of novel coronavirus infection on Friday.

Nationwide, Japan has recorded 618,197 cases of infection and about 10,585 deaths from Covid-19, the respiratory disease the virus causes, government figures showed.

Nishimura said the government aims to place Aichi prefecture, in central Japan, and Fukuoka prefecture in the southwest under a state of emergency - joining Tokyo plus Osaka, Hyogo and Kyoto prefectures, home to nearly a quarter of the population, and where current measures began on April 25.

The northern island of Hokkaido and two other areas will be added to regions under a "quasi state of emergency," he added.

But other requests will be loosened, Nishimura said. Commercial facilities such as shopping malls, for instance, will be asked to shorten opening hours rather than close completely - though he noted that Tokyo and Osaka prefecture would make their own decisions based on local conditions.

Japan has not suffered as badly from the virus as other nations, but its vaccination campaign is significantly lagging, with even many elderly people still awaiting inoculation.

Still, Japan and the International Olympic Committee insist the Games will take place, though foreign spectators have been banned. A decision on domestic spectators has yet to be reached.

Upcoming test events for the Olympics, including an athletics event at the weekend, will not be affected by the extension of the state of emergency. The diving World Cup, which featured more than 200 athletes from 50 countries, was held in Tokyo this past week under the current state of emergency.

Still, in Fukuoka, the prefectural governor said it could be "difficult" to host the Olympic torch relay under a state of emergency, Jiji news agency reported on Thursday. The relay is set to take place in the prefecture on May 11 and 12.