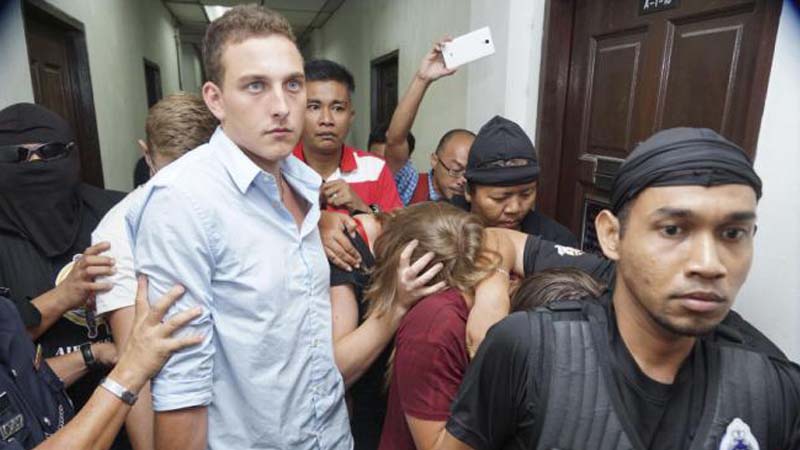 KUALA LUMPUR: Four Westerners who posed naked on Malaysia's highest peak were sentenced to three days in jail and fined for obscene behaviour in a public place, their lawyer said.

The four were among 10 foreigners who stripped naked and took photos on Mount Kinabalu on May 30. A local official has said their behavior was disrespectful to the mountain, which is believed to be sacred, and caused an earthquake on June 5 that killed 18 climbers.

"They were remorseful and regretted their act, and offered to make a public apology," Cham said.

The court was told the women were topless while the two men were totally nude, he said.

The court sentenced them to three days in jail, which they have already served since their arrests, and a fine of $1,330 each, to be followed by their deportation, Cham said.

They have paid their fines and were expected to be released later on Friday, he said. Hawkins was scheduled to fly home on Saturday, but the lawyer couldn't say when the others would leave.

The Malay Mail online news portal said the court was told the group of 10 had challenged each other to see who could remain naked the longest in the cold.

They ignored a plea by their mountain guide not to strip, it said.

Cham said the four had suffered enough trauma from their arrests and that extensive international news coverage would deter others.

Prosecutor Jamil Aripin agreed that there was no link between the earthquake and their act but said it had outraged the local community, the news portal said.

The magnitude-5.9 earthquake sent rocks and boulders raining down on trekking routes on the 4,095-meter (13,453-foot) mountain. The victims were nine Singaporeans, six Malaysians, a Filipino, a Chinese and a Japanese.

The quake damaged roads and buildings and also broke one of the famous twin rock formations on the mountain known as the "Donkey's Ears."

Sabah Deputy Chief Minister Joseph Pairin Kitingan blamed the tragedy on the foreigners for having shown disrespect to the mountain, believed by local tribes to be a resting place for the dead. He said a special ritual will be conducted to appease the mountain spirits.