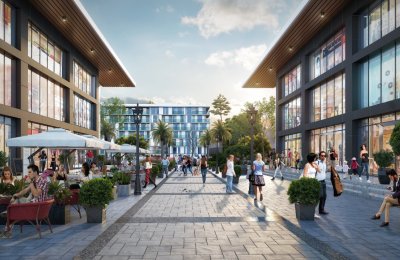 Reportage Properties, a leading real estate developer in the UAE, has launched its new ​​5,500-unit residential project, Monte Napoleone in New Cairo, Egypt.
Located at Mostakbal City ​​on a 465,000-sq-m area, it is the Emirati developer's first project outside the UAE. The project will be developed in co-operation with Al Ahly Sabbour, a leading real estate developer in Egypt.
The project boasts innovatively-designed townhouses, in addition to apartments with distinct areas, starting from one- to four-bedroom units, with the highest standards of luxurious finishing. It is likely to be handed over by the end of Q4 in 2025.
Reportage Properties said the apartments and duplex flats have been attractively priced, with rates starting from AED183,000 ($49,818) onwards. Also special discounts of up to 40% are being offered to investors on cash payments, it added.
These promotions are for fully-finished apartments and townhouses within the project. The
payment plans extends to 80 months with installments of 7900 Egyptian pounds (Dhs1900) per month.
it is expecting project sales of nearly 12 billion Egyptian pounds ($770 million).
A premium project for the UAE developer, Monte Napoleone is located in the heart of urban development in Eastern Cairo, next to phase one of the New Administrative Capital.
The project overlooks the most important landmarks and is in perfect connection with the modern road network, linked to Bin Zayed Road, the middle Ring-road and the Cairo-Suez Road.
Reportage Properties has currently 11 projects under construction, that will add about 5,000 new housing units to its residential portfolio within the most important investment sites in Abu Dhabi and Dubai.
CEO Islam Ahmed Suleiman said that the launch of the first "Reportage Properties" project outside the UAE reflects the company's strong financial position, the stability of its business model, and its ability to expand and develop many new projects in various regions.
He also confirmed the company’s ambitious future plans of growth and expansion in new regions through the next few years.-TradeArabia News Service