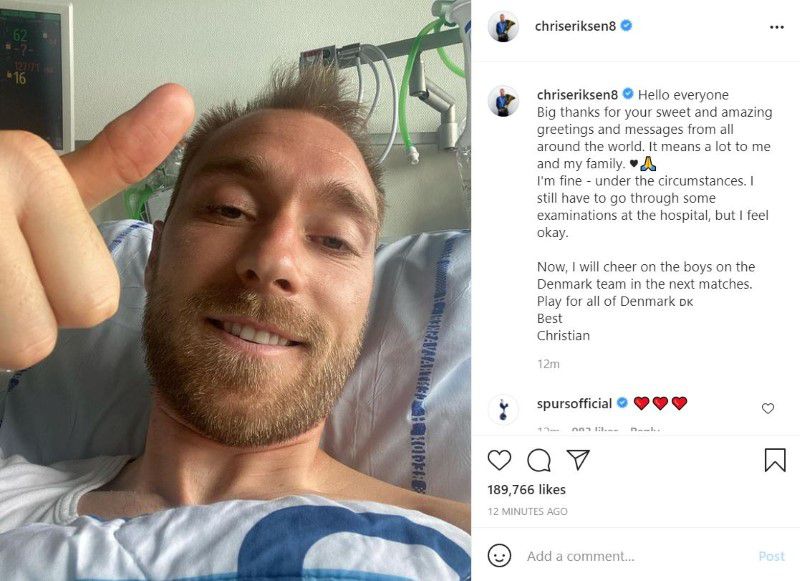 A message is seen on an Instagram account of Danish footballer Christian Eriksen next to a photograph of him giving a thumbs-up at Rigshospitalet, where he is treated after he collapsed during a UEFA Euro 2020 game on Saturday, in Copenhagen, Denmark, in this screen grab from a social media post published June 15, 2021. Danish Football Association/via REUTERS

Denmark's Christian Eriksen said he was feeling "fine -- under the circumstances" and expressed gratitude for the flood of messages he had received after he suffered a cardiac arrest during their Euro 2020 opener on Saturday.

His first public comment since the collapse on the pitch came as his team mates were preparing for Denmark's second Group B game against Belgium on Thursday.

"Big thanks for your sweet and amazing greetings and messages from all around the world. It means a lot to me and my family," Eriksen said in a post on the national team's Instagram profile. "I'm fine -- under the circumstances."

The post was accompanied by a picture of the 29-year-old lying in a hospital bed, smiling and giving a thumbs-up.

"But I feel okay. Now, I will cheer on the boys on the Denmark team in the next matches, Play for all of Denmark," he added.

Denmark coach Kasper Hjulmand said it would be "very emotional" for the players to return to the stadium where they witnessed their team mate collapse.

"I have said - very a propos - that Christian is the heart of our team. He is the pulse, the rhythm of our game," Hjulmand told reporters on Tuesday.

"No one can replace Christian ... But together we will do something together, something different," Hjulmand added.

Eriksen collapsed just before halftime in the match against Finland and was taken to hospital after receiving CPR on the pitch.

UEFA offered the players, who gathered in the locker room, the choice of resuming the match on Saturday evening or beginning again on Sunday at 1200 local time (1000 GMT).

Hjulmand sharpened his criticism of governing body UEFA's handling of the incident.

"I felt that the players and I were being put under pressure. That is the truth. Everything else is not true," Hjulmand said.

"I would have liked if UEFA had said: Of course there will be no more playing tonight, go home and we'll look at it later," he added.

UEFA said on Monday it had dealt with the matter as carefully as it could at the time.

"UEFA is sure it treated the matter with utmost respect for the sensitive situation and for the players. It was decided to restart the match only after the two teams requested to finish the game on the same evening," it said.