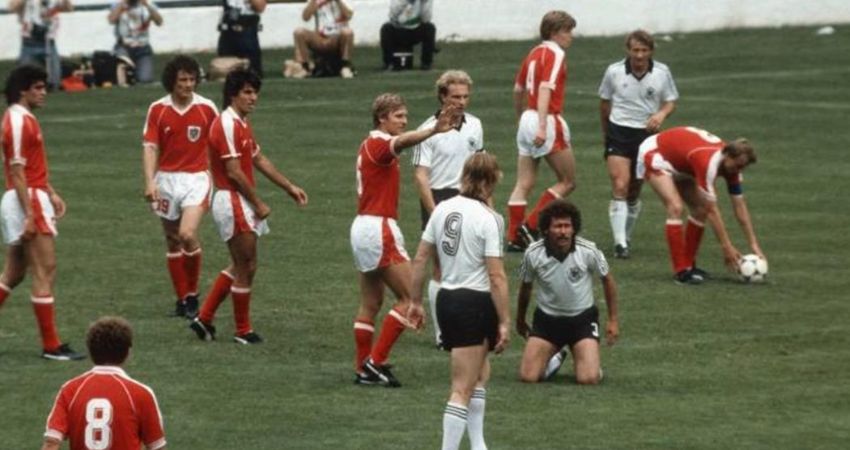 Germans and Austrians celebrate after the game that ended 1-0 for Germany. Photo taken 25 June 1982. (Photo: shorouknews.com)

BUCHAREST: Austria are not considering the option of a draw in their last Euro 2020 Group C game against Ukraine on Monday, a result that may help both teams but that would only dredge up memories of their 1982 "Disgrace of Gijon".

That World Cup game in Spain - a 1-0 win for what was then West Germany - was enough to send both Austria and their neighbours through at the expense of an entertaining Algeria.

An early Germany goal was followed by a soulless kickabout, neither team wanting to score, in a match also mockingly known as the "Gijon Non-Aggression Pact."

On Monday both Ukraine, who only need a point for second place, and Austria, as one of the four best third-placed teams, could advance with a draw.

Both teams are currently on three points, while Netherlands are already through with six, while North Macedonia have yet to open their account after losing both of their games.

The top two in each of the six groups proceed to the round of 16 along with the four best third-placed finishers.

"I do not think that it comes down to that," said Austrian Football Association president Leo Windtner. "In every respect it would be the wrong tactic to go out and play for a point."

He said there would be no "historical repetitions."

"The best thing would be to not even discuss it. That is history. It does not call out for repetition," he said.

The Austrians, who had never won a game at the Euros before their opening 3-1 win over North Macedonia, then lost 2-0 to the Dutch.

"We will try to decide this game in our favour," Austria forward Sasa Kalajdzic said. "I want to win every game, and this one as well."

Austria's forwards made little impact against the Netherlands.

Striker Michael Gregoritsch, who had scored as a substitute against North Macedonia, started for Kalajdzic, but was taken off after an hour to make way for his teammate as coach Franco Foda struggled to find a solution to his misfiring front line.

With top striker Marko Arnautovic back after a one-game suspension for his verbal outburst at an opponent during his goal celebrations against North Macedonia, Foda does have more options.

But Foda will have to see if the volatile striker will prove to be the punching power on the day to carry them into the knockout stage.