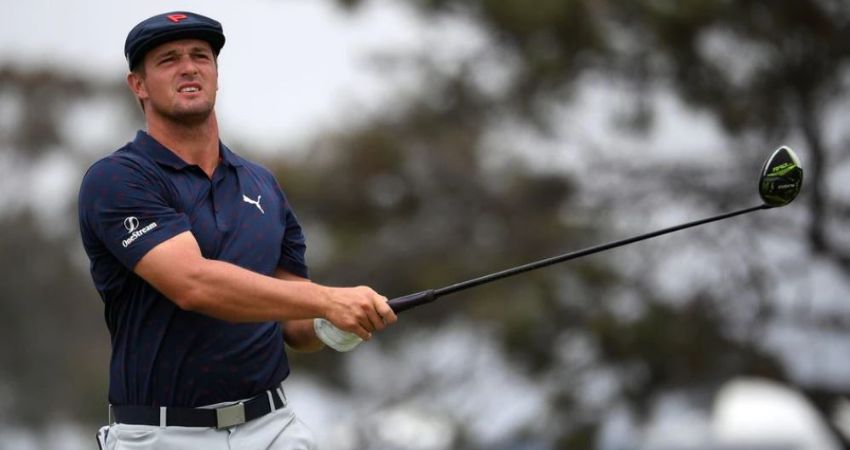 Bryson DeChambeau plays his shot from the fifth tee during the third round of the U.S. Open golf tournament at Torrey Pines Golf Course. (Reuters Photo)

SAN DIEGO - There is no subtelty to Bryson DeChambeau's game plan as he seeks to defend his U.S. Open crown.

With rare exceptions, the ferocious-swinging DeChambeau bashes his drives as far as he possibly can, knowing that as long as he stays in-bounds he should be okay.

He pushed a couple of drives on Saturday so far right that the ball sailed over the high rough and landed outside the gallery ropes in trampled-down grass that afforded him an almost perfect lie.

"When I miss it, because I hit it pretty far, I'm going to miss it off line quite a bit," DeChambeau said after shooting a bogey-free three-under-par 68 to move within two shots of leaders Louis Oosthuizen, Russell Henley and Mackenzie Hughes.

"So that plays kind of into my advantage a little bit more because where the people are walking, it's trampled down and you get some good lies."

DeChambeau arrived at Torrey Pines embroiled in a feud with fellow American alpha-male Brooks Koepka, who backtracked in the third round, shooting 71 to fall five shots behind.

DeChambeau, tracked every step of his round by a local police officer assigned to keep him safe all week, faced no major heckling, but he could not steer totally clear of the controversy either.

It was fairly quiet as he negotiated the far reaches of the course around the 11th and 12th holes, where crowds were thin, but by time he got to the 13th green there were plenty of spectators, invariably young men clutching a can of beer, only too happy to make their support or otherwise all too clear.

"Miss it," someone shouted as DeChambeau putted a couple of holes later.

"Get in the water," yelled another as the player avoided the pond at the last.

But DeChambeau also had his supporters, who yelled such things as "back-to-back" and he won another fan by slinging his ball into the grandstand at the final hole, which a dextrous young man caught for a nice souvenir.

DeChambeau knows the only way to win over fans is by refusing to take any bait.

"People think that it annoys me," he said.

"If anything, it just creates a great atmosphere for golf. At first I didn't really know how to handle it.

"You're kind of thrown into a situation but now I enjoy it. You've got to embrace it. There's going to be team Bryson, team Brooks out there. Hey, keep it up."