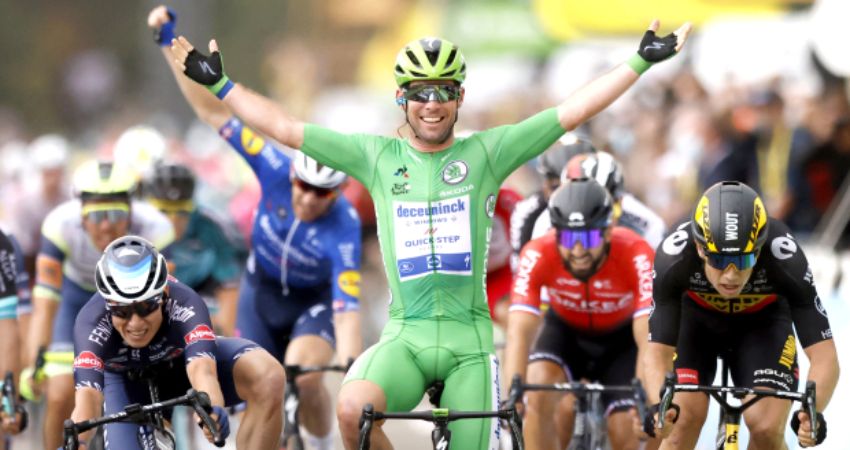 The Briton won a bunch sprint to take the 10th stage, a 190.7km ride from Albertville, to rack up his 33rd career win on the Tour, one fewer than Belgian great Merckx.

Slovenian Tadej Pogacar retained the overall leader’s yellow jersey as he stayed safe in the leading peloton in a nervy finale in the Rhone valley. He leads Australian Ben O’Connor by two minutes, one second and Colombian Rigoberto Uran by 5:18.

Belgian Tosh van der Sande and Canadian Hugo Houle were the two breakaway riders of the day but on the mostly pancake-flat terrain, their chances of beating the peloton were close to zero.

Van der Sande halted his effort with 38km left and Houle was reined in two kilometres further down the road while back in the peloton, Australian Richie Porte was again victim of a crash.

Michael Matthews’s Bike Exchange team upped the pace on a short hill to try to get rid of some of the heavier sprinters, but Cavendish followed.

Italian champion Sonny Colbrelli suffered a mechanical 28km from the line and was forced to spend valuable energy to make his way back into the bunch.

Today’s 11th is a 198.9-km mountain trek in Provence, featuring a double ascent of the awe-inspiring Mont Ventoux.