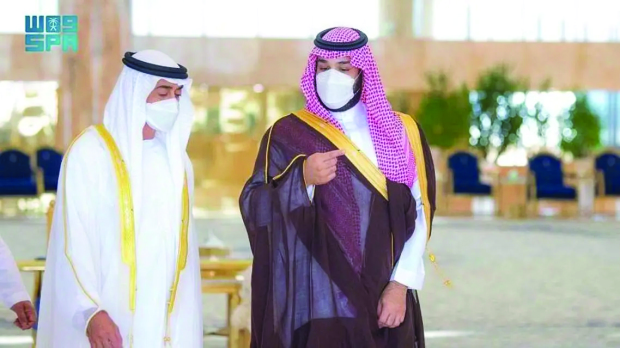 The Crown Princes during their meeting in Riyadh yesterday

“During our meeting in Riyadh, my brother Mohammed bin Salman and I discussed ways to further deepen the fraternal bond and strategic co-operation between our nations,” Shaikh Mohammed Tweeted.

“The partnership between the UAE and Saudi Arabia continues to be strong and prosperous.”

The meeting comes a day after a virtual summit of the Organisation of the Petroleum Exporting Countries (Opec) on Sunday concluded in a deal between the UAE and Saudi Arabia on production quotas.

Opec+ agreed new output quotas for several members from May 2022, including the UAE, Saudi Arabia, Russia, Kuwait and Iraq.

The UAE will see its baseline production, from which cuts are being calculated, increase to 3.5 million bpd from May 2022 from today’s 3.168m.

Saudi and Russia will see their baselines rise to 11.5m bpd each from the current 11m.