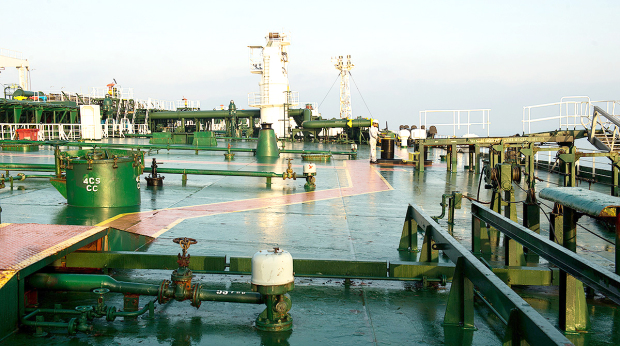 Chinese refiners are the biggest importers of Iranian oil

DUBAI: The United States is considering cracking down on Iranian oil sales to China as it braces for the possibility that Tehran may not return to nuclear talks or may adopt a harder line whenever it does, a US official said.

Washington told Beijing earlier this year its main aim was to revive compliance with the 2015 Iran nuclear deal and, assuming a timely return, there was no need to punish Chinese firms violating US sanctions by buying Iranian crude, he said.

That stance is evolving given uncertainty about when Iran may resume indirect talks in Vienna and whether incoming Iranian President-elect Ebrahim Raisi is willing to pick up where the talks ended on June 20 or demands a fresh start.

The US official, speaking on condition of anonymity, said Iran – which has said it will not resume talks until Raisi takes over – has been “very murky” about its intentions.

“If we are back in the JCPOA, then there’s no reason to sanction companies that are importing Iranian oil,” the US official told Reuters, referring to the 2015 Joint Comprehensive Plan of Action under which Iran curbed its nuclear program in return for relief from economic sanctions.

“If we are in a world in which the prospect of an imminent return to the JCPOA seems to be vanishing, then that posture will have to adjust,” he added.

The Wall Street Journal first reported Washington was considering tightening enforcement of its Iran sanctions, notably against China, which received a daily average of 557,000 barrels of Iranian crude between November and March according to Refinitiv Oil Research.

Chinese refiners are the biggest importers of Iranian oil. Reuters reported on Thursday that the Chinese logistics firm China Concord Petroleum Co has emerged as a central player in the supply of sanctioned oil from Iran and Venezuela.

That US officials are hinting at a possible crackdown may be a veiled threat that Washington has ways to exact a price from Tehran, said Brookings Institution analyst Robert Einhorn.

“It’s probably to send a signal to Raisi that if the Iranians are not serious about coming back to the JCPOA, the US has options and there will be costs,” Einhorn said.

How Beijing, whose relations with Washington are strained over issues from human rights to the South China Sea, might react will depend on whether it blames Iran or the United States for the impasse in the talks, he said.

One Iranian official said it was up to Iran’s supreme leader when talks resume, suggesting this could happen when Raisi takes over on Aug. 5 or a few weeks later. He also said it was unclear if Iran’s chief nuclear negotiator, Abbas Araqchi, would remain.

“We should wait for the new president to take office and decide whether he wants to change the nuclear team or not. It seems that Dr. Araqchi will not be changed, at least during the handover period,” said this official on condition of anonymity.

A second Iranian official said Raisi and his nuclear team insist on starting from scratch and refuse to pick up the talks where they ended in June.

“They want their own terms and conditions and they have more demands like keeping the 60 per cent enrichment or chain of advanced centrifuges and not dismantling them as demanded by Washington,” he said.

The uncertainty is forcing the United States to examine new approaches, even though US and European officials have said there are no good options to reviving the JCPOA.

“If ... we were to conclude that the talks are dragging on for too long and we don’t have a sense of whether they are going to reach a positive outcome, then of course we would have to take a fresh look at our sanctions enforcement, including on Chinese entities that were purchasing Iranian oil,” the US official said, declining to predict the timing of any decision.

“It’s not ... black and white,” he said. “We’ll make it based on the time it’s taking for Iran to come back and the posture they will take if and when they do come back.”