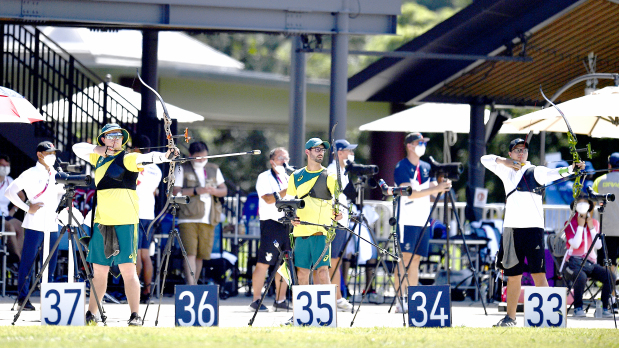 South Korean archers took the top places in qualification yesterday, with one breaking an Olympic record that had stood for 25 years, as the country’s women archers take aim at the longest gold medal streak in the team event at the Games.

All 128 archers, 64 women and 64 men, shoot a qualifying round for the individual event. They total their points scores, up to a maximum of 720, and are ranked from top to bottom at the end of the round. Each one’s position after the ranking round becomes their seed for matchplay.

An San topped the field, with the 20-year-old woman shooting 680 points to beat the record set at the 1996 Olympics in Atlanta.

“I did my best, and that led to good results. I feel nothing but happy,” An told reporters.

South Korea’s female archers hold all the Olympic records and have won every team gold since the first in 1988.

If they win their ninth gold medal in the women’s team event in Tokyo, that will tie the longest gold medal streak in all sports at the Olympic Games.

Heat and wind conditions posed challenges for many archers on their first day of Olympic competition in Tokyo.

One Russian archer recovered after fainting in the Tokyo heat during a qualifying Olympic round.

Australia’s Ryan Tyack, a Rio 2016 Olympic bronze medallist, said: “Both places (Rio and Tokyo) are hot and both are humid, but in Japan the wind on the qualification field is quite tricky to read.”

Two South Korean men archers, Kim Je Deok and Oh Jin Hyek, were ranked among the top three on a qualifying round for the individual event yesterday afternoon.

Brady Ellison, a veteran American archer and the world No.1, finished with the second top score, and said he was looking forward to fighting for gold against the South Koreans.

“I love shooting against Koreans. So hopefully we’ll get a chance this weekend,” Ellison, aiming for his first Olympic gold, told reporters.