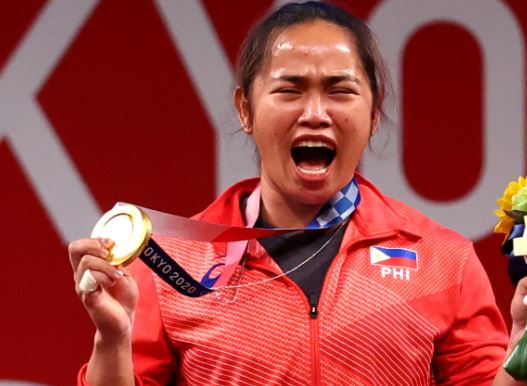 Ecstatic fans at the Manila airport brought out their phones to take pictures of Diaz, while a banner saying “We are proud of you” hung at the arrival area, a live stream of her homecoming on Facebook showed.

“We’re here to welcome our first gold medallist from the Olympics after 97 years,” said fan Maximo Vallejo, while holding a banner with Diaz’s image and her athletic achievements.

Upon arrival, Diaz, who is also an airwoman, changed into her air force uniform before she was ushered to the VIP lounge where she met virtually with President Rodrigo Duterte and his cabinet.

“The nation is ecstatic about your achievement. Your achievement is the achievement of the Philippine nation. We are extremely proud,” Duterte told Diaz, who thanked him in return.

Diaz made history on Monday after she ended the near century-long wait for Olympic gold for the Philippines, which first competed in the Games in 1924.

In her fourth Olympics, the 30-year-old lifted a combined weight of 224 kg, an Olympic record. China’s Liao Qiuyun, who failed to match her own world record, took silver with 223 kg. Kazakhstan’s Zulfiya Chinshanlo won bronze with 213 kg.

Duterte told Diaz she will receive a presidential merit award on top of the 10 million pesos ($199,000) due to her from the government and another 3 million pesos from his office.

Before their meeting ended, Diaz stood up and gave Duterte a salute.