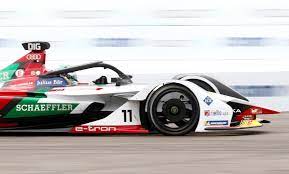 Brazilian Lucas di Grassi won the penultimate race of the Formula E season in Berlin on Saturday with more than half the grid remaining mathematically in title contention with one day to go.

New Zealander Mitch Evans was third for Jaguar on the temporary track around the capital's old Tempelhof airport and is fourth overall and a point behind Britain's Jake Dennis for BMW i Andretti.

The gap between first and seventh in the championship is only nine points.

With 30 points available on Sunday, the top 14 drivers remain theoretically in with a shout.

"Everything is fully open going into tomorrow's race, we’re going to try as hard as possible to win both races and I’m sure if we win tomorrow, we will be there to win the Championship," said Audi's di Grassi, the 2016-17 champion.

Di Grassi is sixth overall, eight points off the lead.

Jaguar are top of the teams' championship with 171 points to DS Techeetah's 166, despite Britain's Sam Bird suffering a third successive retirement and dropping to eighth overall.

Sunday's race will be run clockwise, the opposite to Saturday's.

The 2020-21 season is Formula E's seventh but the first to be sanctioned by governing body FIA as a full world championship. (Reporting by Alan Baldwin in London; Editing by Hugh Lawson)