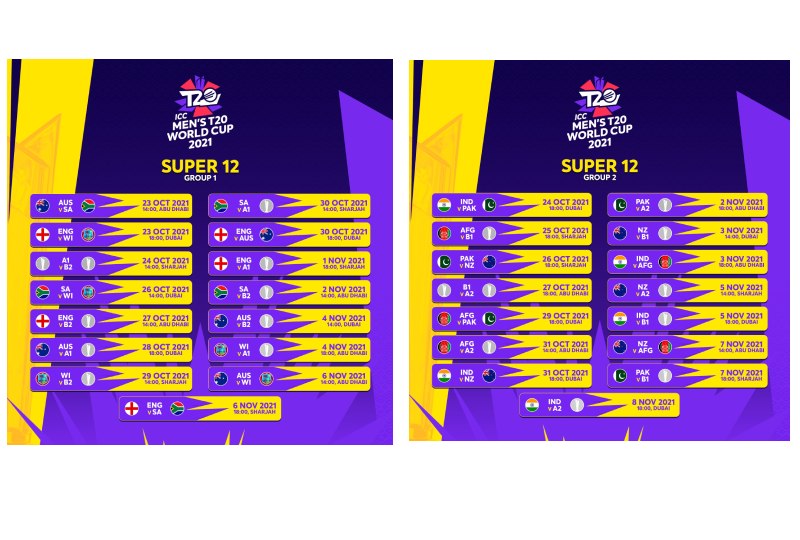 DUBAI: Australia will begin their campaign for an elusive Twenty20 World Cup on October 23 when they take on South Africa in their opening match in Dubai, the International Cricket Council said yesterday.

Australia have won the 50-overs World Cup a record five times but have failed to lift the trophy in the T20 format.

Aaron Finch’s men are in Group 1 of the Super 12 stage alongside England, defending champions West Indies, South Africa and two qualifiers from the preliminary round.

In the seventh edition of the tournament, India have been placed in Group 2 with arch-rivals Pakistan, world Test champions New Zealand, Afghanistan and two more qualifiers.

India and Pakistan, who only play each other in ICC events, will meet on October 24 in one of the most highly-anticipated clashes in the sport.

West Indies, the only side to win the tournament twice, will also feature on the opening day of the Super 12s, beginning their title defence against England, the world’s top-ranked T20 side.

Old rivals England and Australia will lock horns in Dubai on October 30.

This year’s Twenty20 World Cup was shifted to the UAE and Oman from India due to the surge in novel coronavirus infections in the South Asian country.

Matches in the UAE will be played in Dubai, Abu Dhabi and Sharjah, while the Oman Cricket Academy Ground will be the fourth venue.

The tournament’s first round features Sri Lanka, Ireland, Netherlands and Namibia in Group A, and Bangladesh, Scotland, Papua New Guinea and Oman in Group B. Top two from each group will progress to the Super 12 stage.

The final will be held in Dubai on November 14.

Oman will take on Papua New Guinea in the opening qualifier on October 17.