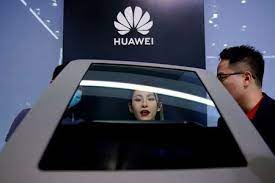 People check a display near a Huawei logo during a media day for the Auto Shanghai show in Shanghai, China April 19, 2021. Reuters Photo

WASHINGTON: US officials have approved licence applications worth hundreds of millions of dollars for China’s blacklisted telecom company Huawei to buy chips for its growing auto component business.

Huawei, the world’s largest telecommunications equipment maker, has been hobbled by trade restrictions imposed by the Trump administration on the sale of chips and other components used in its network gear and smartphones businesses. The Biden administration has been reinforcing the hard line on exports to Huawei, denying licences to sell chips to Huawei for use in or with 5G devices.

But in recent weeks and months, people familiar with the application process told Reuters the US has granted licences authorising suppliers to sell chips to Huawei for such vehicle components as video screens and sensors.

The approvals come as Huawei pivots its business toward items that are less susceptible to US trade bans.

Republican Senator Tom Cotton, who has been deeply critical of Huawei in the past, said in a statement, “It’s unacceptable for the Biden administration to ease the pressure campaign against Chinese spy companies like Huawei.”

One source said the government is granting licences for chips in vehicles that may have other components with 5G capability.

A US Department of Commerce spokesperson said the government continues to consistently apply licensing policies “to restrict Huawei’s access to commodities, software, or technology for activities that could harm US national security and foreign policy interests.”