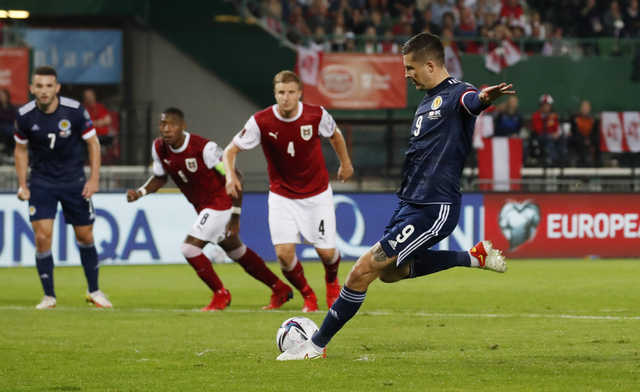 VIENNA - Scotland boosted their World Cup qualification hopes in Group F as a Lyndon Dykes penalty earned them a 1-0 win over Austria on Tuesday that took them into second place.

A VAR review handed the Scots a 30th-minute spot kick after defender Martin Hinteregger manhandled Che Adams and Dykes drove his penalty down the middle and through keeper Daniel Bachmann.

Austria were then furious they were not awarded a penalty just before the break when the ball struck Stephen O'Donnell's arm as he rose for a header with Christoph Baumgartner.

Scotland then defended superbly to hold onto the lead, with Steve Clarke's side moving to 11 points, a point ahead of Israel and four clear of the Austrians.

The result was another setback for Austria after their 5-2 loss in Israel on Saturday and their fans booed and heckled them as they left the field.

Denmark lead the group on a perfect 18 points from six matches after their 5-0 thrashing of visitors Israel but with four matches remaining the Scots now have a good chance of securing second spot and a place in the playoffs.

"We came here to win and we did that," Dykes said after their second win of the week, following Saturday's victory over Moldova.

"With each game this week we got stronger and stronger - showing the togetherness that we have. We work hard for each other and the defending starts from the front," he added.

In October, Scotland are at home to Israel and away to the Faroe Islands before going to Moldova and ending at home to Denmark.