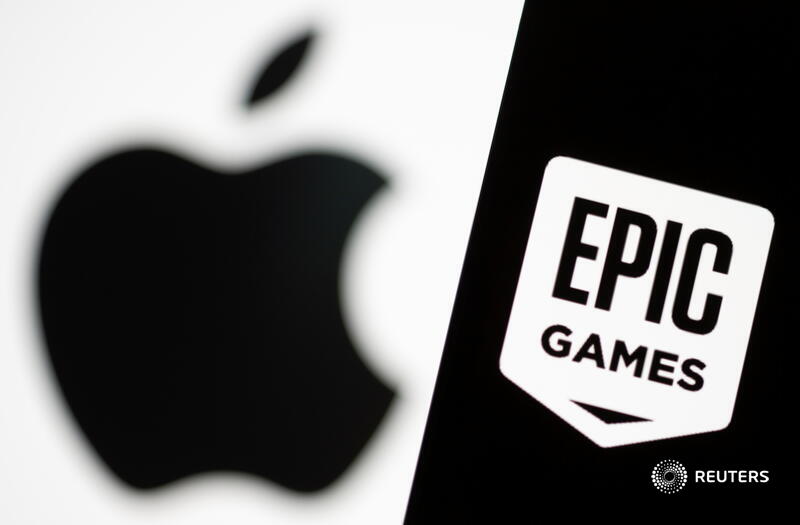 Smartphone with Epic Games logo is seen in front of Apple logo in this illustration taken, May 2, 2021. REUTERS/Dado Ruvic/Illustration/File Photo

A US federal judge struck down some of Apple Inc's App Store rules on Friday, forcing the company to allow developers to send their users to other payment systems in a partial win for "Fortnite" creator Epic Games and other app makers.

Epic said it would appeal the ruling, with CEO Tim Sweeney tweeting that the ruling "isn't a win for developers or for consumers."

The outcome left Apple's critics and rivals saying they are more likely to turn to legislators, rather than courts, to pursue the changes they seek.

US District Judge Yvonne Gonzalez Rogers described her ruling as requiring a "measured" change to Apple's rules. Analysts said the impact may depend heavily on how the iPhone maker chooses to implement the decision.

Apple shares were down 3.2% late on Friday afternoon, but many Wall Street analysts maintained their long-term favourable outlooks on the iPhone maker.

"We suspect the eventual impact from this will be manageable," Evercore ISI analyst Amit Daryanani wrote in a note to investors.

The ruling vastly expands a concession made to streaming video companies last week allowing them to direct users to outside payment methods.

The decision expands that exemption to all developers, including the game developers who are the biggest cash generators for Apple's App Store, which itself is the foundation of its $53.8 billion services segment.

The judge ruled that Apple can no longer bar developers from providing buttons or links in their apps that direct customers to other ways to pay outside of Apple's own in- app purchase system.

The ruling also said Apple cannot ban developers from communicating with customers via contact information obtained by the developers when customers signed up within the app.

The ruling comes after a three-week trial in May before Gonzalez Rogers of the US District Court for the Northern District of California.

Gonzalez Rogers stopped short of granting Epic some of its other wishes, such as forcing Apple to open the iPhone up to third-party app stores.

Apple said in a statement: "As the Court recognised ‘success is not illegal. Apple faces rigorous competition in every segment in which we do business, and we believe customers and developers choose us because our products and services are the best in the world."

In a media briefing, Apple's legal team said it does not believe the ruling forces it to allow developers to implement their own in-app purchase systems.

Apple officials said the company is still debating how it will implement the requirements of the ruling and whether it will appeal.

The judge sided with Apple on key questions such as defining the relevant antitrust market as gaming transactions, rejecting Epic's argument that the iPhone is its own app market over which Apple is a monopolist.

"Epic is fighting for fair competition among in-app payment methods and app stores for a billion consumers," Epic's CEO, Sweeney, said on Twitter. "We will fight on."

The Epic lawsuit began after the game maker inserted its own in-app payments system in "Fortnite."

Challenges to Apple's App Store rules are far from over. The ruling on Friday suggests they are more likely to play out in statehouses and capitals than in courtrooms.

Lawmakers in the United States and Europe are considering bills that would force Apple to allow third-party in-app payment systems, and South Korea's parliament has already passed such a law.

"What today’s ruling also makes clear is that antiquated antitrust laws cannot solely be fixed by the courts," Match Group, which has challenged Apple's practices in Europe and owns the popular dating app Tinder, said in a statement. "Apple and Google's monopolistic practices will only end when we bring our laws into the digital age, as South Korea did last week."

Lawmakers in the US Congress said the ruling showed that courts alone will not address their concerns.

While Gonzalez Rogers did not find that Apple is a monopolist, she found that the trial showed Apple was violating California state competition and showed some "incipient antitrust violations" that required a nationwide remedy.

John Newman, a law professor at the University of Miami, said the ruling leaves open avenues for US regulators to challenge Apple in court. Reuters has previously reported that the US Department of Justice is probing the iPhone maker.

The orders follow Apple's agreement last week with the Japan Fair Trade Commission, under which it eases rules for "reader" apps like Netflix Inc to provide a link to customers to sign up for a paid account outside of the app. Games are a larger portion of Apple's sales.

But whether the ruling eats into that revenue depends on how Apple implements the changes.

"To some degree, Apple could make it so that its in-app payments are still the easiest to use," said Ben Bajarin, head of consumer technologies at Creative Strategies.

Shares of Alphabet Inc, whose Google unit operates an app store for Android smartphones and which Epic is also suing on antitrust charges, were down 1.7% late on Friday.