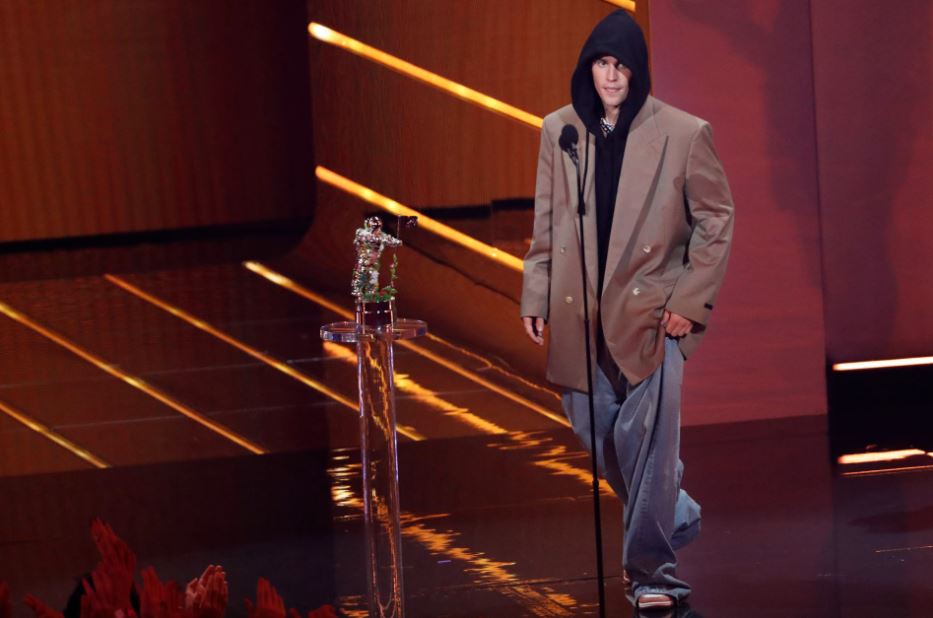 Newcomer Olivia Rodrigo and K-pop band BTS were also among the big winners at the first major awards shows in New York to be held with a full audience of fans and celebrities since the coronavirus pandemic.

Bieber, 27, returned to the VMA stage for the first time in six years and took home Moon Person statuettes for artist of the year and best pop for his single "Peaches."

"Music is such an amazing outlet to be able to reach people and to be able to bring us all together," said Bieber, referring to the dark days of the pandemic.

Last year the VMAs took place in New York without a live audience and with most performances recorded in advance because of the pandemic.

Lil Nas X, 22, who had a breakout hit with "Old Town Road" two years ago, won video of the year for "Montero (Call Me By Your Name)."

Sunday's ceremony also marked the 40th anniversary of the launch of MTV as a channel dedicated to playing music videos.

Madonna, also celebrating her 40 years in the music business, opened the show in a surprise appearance. "They said we wouldn't last. But we're still here," Madonna said.

Jennifer Lopez and Cyndi Lauper sent fans wild with unexpected appearances, with Lauper weighing in on abortion rights saying that women want "control over our bodies."

Rodrigo, 18, took home three awards, including best new artist and song of the year for "Drivers License" in the fan-voted awards, capping a break-out year.

"This is so insane. This has been the most magical year of my life," Rodrigo said, dedicating her win to "all the other girls who write songs on their bedroom floor."

BTS was named group of the year and won best K-Pop for single "Butter", and sent thanks by video from South Korea.

Rock band Foo Fighters got the Global Icon Award recognizing their 25 years in the music industry.

The 12-time Grammy-winning band performed a medley of hits with "Charlie R.I.P" scrawled on their drum kit in tribute to the late Rolling Stones drummer Charlie Watts.