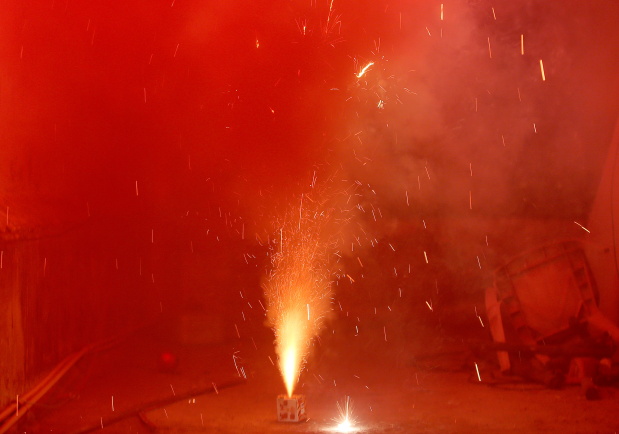 FILE IMAGE: Smoke billows from a firework after it was lit on the rooftop of a residential building during Diwali, the festival of lights, celebrations in New Delhi, India, October 27, 2019. Reuters Photo

NEW DELHI: Delhi authorities ordered a ban on the storage, use and sale of firecrackers in the Indian capital late on Wednesday ahead of the Diwali festival to curb air pollution levels which cause thousands of deaths each year.

India is among the most polluted countries in the world, and air quality in Delhi and neighbouring northern states normally begins to deteriorate at the end of September as farmers set off crop fires to prepare for a new sowing season.

Delhi recorded some of the worst pollution levels globally in its latest peak pollution period between October 2020 and January 2021.

"In view of the dangerous condition of Delhi's pollution during Diwali for the last three years, like last year, a complete ban is being imposed...so that people's lives can be saved," said the Delhi Chief Minister Arvind Kejriwal on Twitter.

Kejriwal said he was cracking down on crackers much before Diwali so traders didn't stock up supplies.

The comments come amid concerns that air pollution could pose an additional health risk at a time when the country is already grappling with the coronavirus pandemic.

The emissions of the dangerous PM2.5 particles per cubic metre of air in Delhi averaged 30.74 micrograms in the first two weeks of September, marginally above the 25 per cubic metre level deemed safe by the World Health Organisation (WHO).

Some Indian states have stepped up punishments for crop residue burning over the last couple of years to avert an expected spike in air pollution that brings smog every year during the low temperatures of winter as part of a federal drive to clean up Delhi's air.

The state is set to elect a new assembly next year and analysts say the ruling Bharatiya Janata Party is trying to placate farmers.