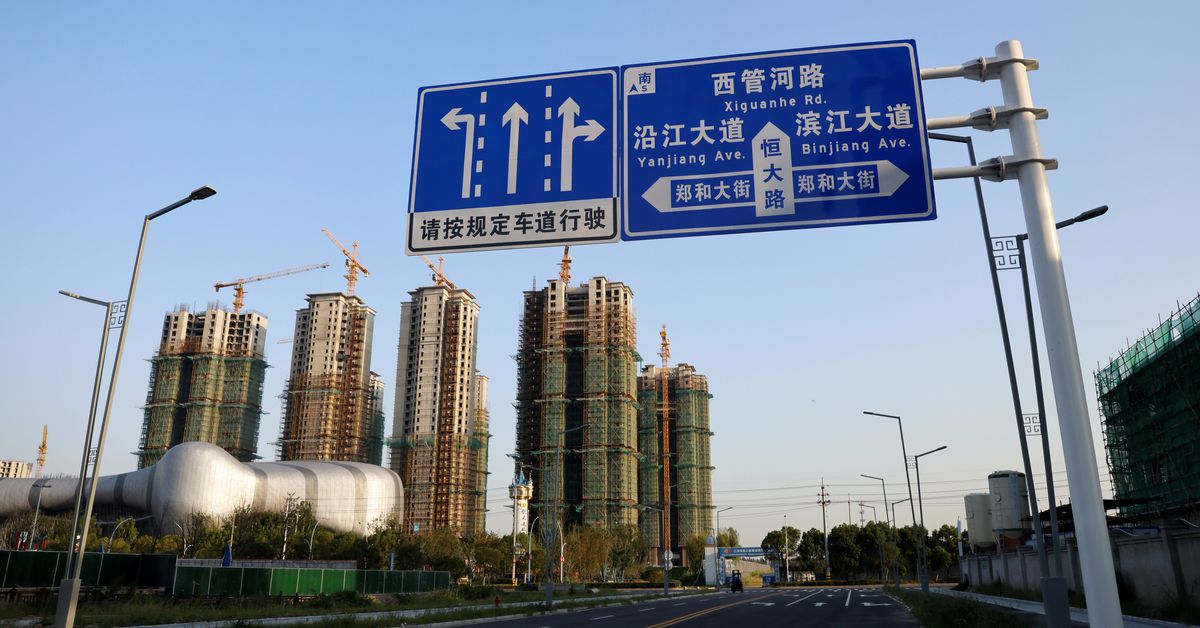 China Evergrande's electric car unit warned on Friday it faced an uncertain future unless it got a swift injection of cash, the clearest sign yet that the property developer's liquidity crisis is worsening in other parts of its business.

Evergrande owes $305 billion, has run short of cash and investors are worried a collapse could pose systemic risks to China's financial system and reverberate around the world.

The company missed a payment deadline on a dollar bond this week and its silence on the matter has left global investors wondering if they will have to swallow large losses when a 30-day grace period ends.

China Evergrande New Energy Vehicle Group, meanwhile, said without a strategic investment or the sale of assets its ability to pay staff and suppliers and mass-produce vehicles would be hit.

Evergrande's silence on this week's $83.5 million interest payment contrasts with its treatment of its domestic investors.

On Wednesday, Evergrande's main property business in China said it had privately negotiated with onshore bondholders to settle a separate coupon payment on a yuan-denominated bond.

"This is part of the tactics of any sovereign-driven restructuring process - keeping people in the dark or guessing," said Karl Clowry, a partner at Addleshaw Goddard in London.

"The view from Beijing is offshore bondholders are largely Western institutions and so can justifiably be given different treatment. I think people think it's still a falling knife."

China's central bank again injected cash into the banking system on Friday, seen as a signal of support for markets. But authorities have been silent on Evergrande's predicament and China's state media has offered no clues on a rescue package.

"These are periods of eerie silence as no one wants to take massive risks at this stage," said Howe Chung Wan, head of Asia fixed income at Principal Global Investors in Singapore.

"There's no precedent to this at the size of Evergrande ... we have to see in the next ten days or so, before China goes into a holiday, how this is going to play out."

Evergrande is expected to be one of the largest-ever restructurings in China and hopes are not high for a swift resolution.

The liabilities of China's HNA group pale in comparison but its insolvency is still ongoing, with creditors seeking $187 billion, according to a source familiar the talks. On Friday, police seized both the HNA chairman and its CEO.

So far, there have been few signs of stress in money and credit markets as well as other areas that would signal that the crisis was spreading beyond China.

Evergrande appointed financial advisers and warned of default last week and world markets fell heavily on Monday amid fears of contagion, though they have since stabilised.

The conundrum for China's leaders is how to impose financial discipline without fuelling social unrest, since an Evergrande collapse could crush a property market which accounts for 40% of Chinese household wealth.

Protests by disgruntled suppliers, home buyers and investors last week illustrated discontent that could spiral in the event a default sparks crises at other developers.

China's fragmented property market is showing some signs of strain, which could spur a wave of consolidation among real estate companies.

Capital Economics' senior China economist, Julian Evans-Pritchard, said Evergrande's crisis had had a much bigger impact on housing demand than he had anticipated, and households had turned much more cautious, triggering a drop in prices.

“I think Evergrande is going to have real issues. I don’t think the interest payment is going to be made,” Marc Lasry, CEO of Avenue Capital Group, said on CNBC Friday. Lasry said he had sold Evergrande’s bonds.

Global markets on Friday seemed rattled by the missed payment and regulatory silence.

Some $20 billion of Evergrande's debts are owed offshore while at home there are risks for China's property sector and its liabilities spread across bank balance sheets and beyond.

There have been few signs of official intervention. The People's Bank of China's 270 billion yuan ($42 billion) cash injection this week is the largest weekly sum since January and has helped put a floor under stocks.

Some banks, insurers and shadow banks have begun checks on their exposure to the troubled sector.

"We are concerned about the spillovers into the real economy and broader credit conditions," said analysts at Societe Generale in a note. "The longer policymakers wait before acting, the higher the hard-landing risk."

Analysts at BoFA Global Research, however, are among those who believe Chinese officials will be able to contain any Evergrande fallout.

“China has both the will and the tools to ring-fence a property crisis. Allowing the crisis to continue to escalate could threaten the key goal of social stability,” they said in a recent report.

Evergrande's shares fell about 13% on Friday, while stock of its electric-vehicle unit dropped 20% to a four-year low. Its bonds fell slightly and its offshore bonds with imminent payments due last sat around 30 cents on the dollar and were thinly traded.

"It is clear now that Evergrande will make use of the 30-day grace period, to see if there is any further development or instructions from the government," said Jackson Chan, assistant manager of fixed income research at research portal Bondsupermart.