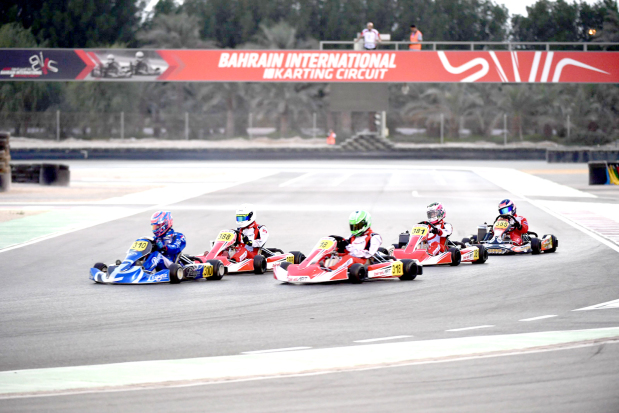 Bahrain International Karting Circuit (BIKC) will be the stage for two-action-packed days of exciting grassroots racing tomorrow and on Saturday, with some of the kingdom’s most prolific karters of different ages and nationalities returning to the track to battle it out along the 1.414-kilometre CIK-FIA track.

This is the first year of the SRMC and it is being held alongside the long-established Bahrain Rotax MAX Challenge (BRMC), which is scheduled to kick off later this 2021/2022 season at BIKC.

Following an exciting opening two rounds held earlier this month, the series is set for more heated action with the inaugural titles in five different race classes on the line.

Luca Houghton has been the star man so far in the SRMC, winning the Junior Max category in both of the first two meetings.

Alexander Christov and Shaikh Ahmed bin Saqer Al Khalifa shared the honours in the Micro MAX class of the first and second rounds, respectively, as did Charlie Goddard and Shaikh Rashid bin Salman Al Khalifa in the Mini MAX.

In the Senior MAX category, Fahad Alkhaled was the winner in round one and Fahad Almuqla in round two.

The season’s third round will take place tomorrow followed by the championship finale on Saturday. Both meetings will follow the same schedule of sessions.

Kicking things off will be Qualifying Practice for all classes, starting with the Micro and Mini MAX together at 3pm. The junior competitors will then get out on track at 3.13pm, followed by the seniors at 3.26pm and the DD2 karters at 3.39pm.

Following all the action, the podium ceremonies awarding each category’s top three finishers will take place in the presence of BIC, BIKC and Bahrain Motor Federation officials.

Highly competitive fields of karters in each category are expected to take part in the back-to-back events.

In the Micro class, Alexander Christov and Shaikh Ahmed bin Saqer Al Khalifa will once again be duelling for race victories, while in the Mini category Charlie Goddard, Shaikh Rashid bin Salman Al Khalifa, Khaled Al Najjar and Ainis Vibriantis will be in the fray.

The participants are representing some of the biggest international karting teams, including Praga ME, BirelArt, Forza Bahrain and NorthStar.