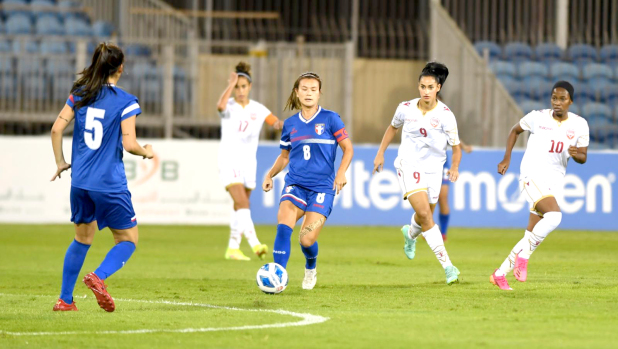 Chinese Taipei will return to the AFC Women’s Asian Cup for the first time since 2008 after they secured the final place in India 2022 with a 2-0 win over Bahrain yesterday.

In the 25th and final qualifying match across Asia, Kazuo Echigo’s side needed only a draw to end their qualification drought, but they advanced in style thanks to second half goals from Lai Li-chin and Chen Yen-ping.

Three-time Asian champions in the late 1970s and early 1980s, Chinese Taipei’s victory means they will now once again rub shoulders with Asia’s women’s football elite, while Bahrain’s bid for a maiden appearance fell short at the final hurdle.

Both sides came into the Group A finale knowing a win would be enough to qualify, and Chinese Taipei were the more proactive team from the start, with most of the action taking place In Bahrain’s defensive half of the pitch, where the hosts defended in numbers.

It wasn’t until the 54th minute when Su Yu-hsuan found herself with a clear sight on goal, and while that opportunity was squandered with an off-target attempt from the Chinese Taipei forward, it signalled the start of a match winning period for the East Asian side.

Scoreless in 150 minutes of tournament play, Bahrain now needed two goals in 30 minutes, but it was Chinese Taipei who remained on top, and Salman saved well to deny another free-kick from Hsu Yi-yun six minutes later.

Bahrain fought valiantly to keep their India 2022 dream alive, but Chinese Taipei’s place in the Finals was as good as secure when Chan arrived to nod home a loose ball after Salman turned Pan Yen-hsin’s initial shot onto the crossbar in the 77th minute.

Echigo’s charges will discover their group stage opponents in Thursday’s tournament draw, with the Finals to begin on January 20.

Yesterday’s win also keeps them in the hunt for a second ever Fifa Women’s World Cup appearance, with the top five teams at India 2022 to qualify for the 2023 global showpiece in Australia and New Zealand.

Meanwhile, Myanmar completed their qualification mission with a 2-0 victory over UAE.