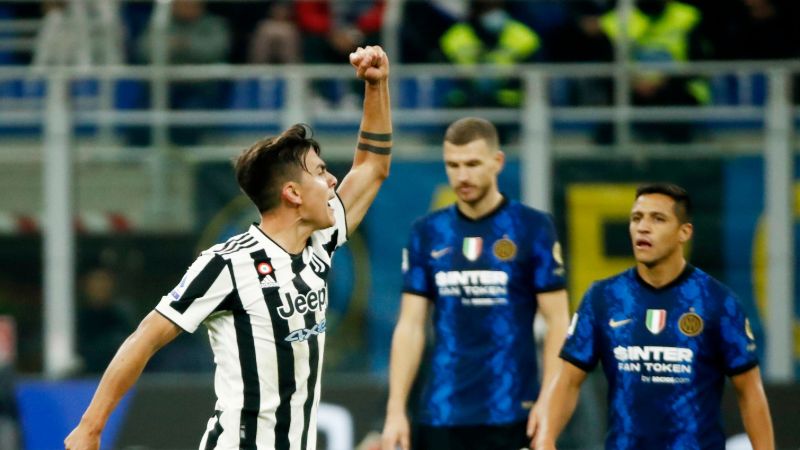 Massimiliano Allegri's side travelled to Milan in fine form having won their previous six games in all competitions, but soon fell behind as Inter striker Edin Dzeko fired home after Hakan Calhanoglu's shot had hit the post in the 17th minute.

The visitors piled on the pressure in the second half as they searched for an equaliser, but looked set to be frustrated after failing to create any clear cut chances.

However, Juve were handed a lifeline following a VAR review of a tackle from Inter's Denzel Dumfries on Alex Sandro, leading to the referee to point to the spot. Dybala grabbed the opportunity to fire in the equaliser in the 89th minute.

Inter were furious with the decision -- coach Simone Inzaghi was sent off for his protestations -- as they had to settle for a draw that left them third in the standings with 18 points, while Juventus climbed to sixth a further three points adrift.

"I think it's a very important point. We are Juventus, we play to win, but today we faced a team that plays good football," Dybala told DAZN.

"I think that after so many years here, my time has come."

Having failed to win any of their opening four league fixtures for the first time in 60 years this term, Juve have turned their season around under returning coach Allegri.

Home goalkeeper Samir Handanovic was forced into a fine double save early on, but with their first attack of the match, Inter took the lead as veteran Dzeko pounced to score his seventh league goal of the season.

Despite being the top goalscorers in Serie A, Inter's challenge fizzled out.

Allegri introduced Dybala and Federico Chiesa in the second half to try lift his side, but Inter looked comfortable until the penalty decision, given for Dumfries lunging into a high tackle that was initially missed by referee Maurizio Mariani.

Inzaghi threw a spare shirt onto the pitch in frustration -- which led to his dismissal -- before substitute Dybala converted his 18th penalty in Serie A.

"It was the only way we could concede a goal, it is disappointing," Inzaghi told DAZN.

"I feel we controlled the game from start to finish, we allowed Juventus nothing and I am not happy to have seen two points thrown away. The referee was right there, he could see the incident and didn’t need to be called over for that. I am disappointed for our fans, as we played well and deserved more.

"I admit my protests was not a good image to portray, but I felt in that moment it was not a VAR incident."

Allegri was pleased to see his side continue their revival.

"The first half performance was good, the second even better," Allegri told DAZN. "It's a good point, it keeps us within three points of Inter and allows us to continue this positive run of results."