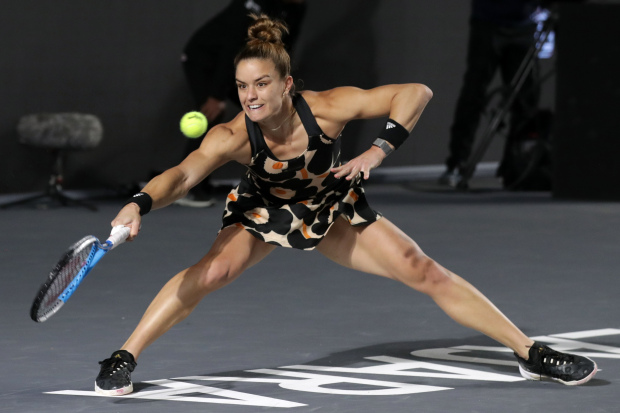 Maria Sakkari won a rollercoaster match against Aryna Sabalenka 7-6(1) 6-7(6) 6-3 on Monday to advance to the semi-finals of the WTA Finals, where the in-form Greek will meet red-hot Estonian Anett Kontaveit.

In a battle between two of the game's biggest hitters, Sakkari battled back from a break down and pounded three aces in the first set tiebreaker to take the early lead in the win-or-go-home Chichen Itza group match.

Sabalenka came out on the winning side of a wild second set, unleashing a punishing backhand winner to convert her fourth set point and bring the Guadalajaran crowd to their feet.

Sakkari's fitness proved the difference in the deciding set and she pumped her arms triumphantly when a worn down Sabalenka misfired on match point in the high-altitude Mexican city.

"It was a rollercoaster match from both of us," said Sakkari, who had lost in her four previous meetings with the Belarusan.

"I was up a break, then she was up a break. It was just a matter of who took the chances. I think at the end I just played with my heart and fought well, just turned things around."

The demonstrative Sabalenka lost her temper at times during the marathon match, typically after issuing one of her 19 double faults.

She threw her racket to the court and blasted a ball into the stands but, in a moment of levity, shot the chair umpire a wry grin and when video replay confirmed her challenge to his call that her serve was out, leading to a loud ovation.

The stakes were low since the 24-year-old Badosa had already advanced to the semis, where she will meet fellow Spaniard Garbine Muguruza for the first time, and Swiatek had already been eliminated following losses to both Sakkari and Sabalenka.

But the 2020 French Open champion was all smiles after she rifled a forehand return winner on match point to end Badosa's eight-match winning streak.

"I think it was a really solid match from me," the 20-year-old Swiatek said.

"I'm pretty happy that I had a chance to show my tennis finally, overcome all these factors around, just play the game. I really enjoyed myself today on court, which is really important for me."