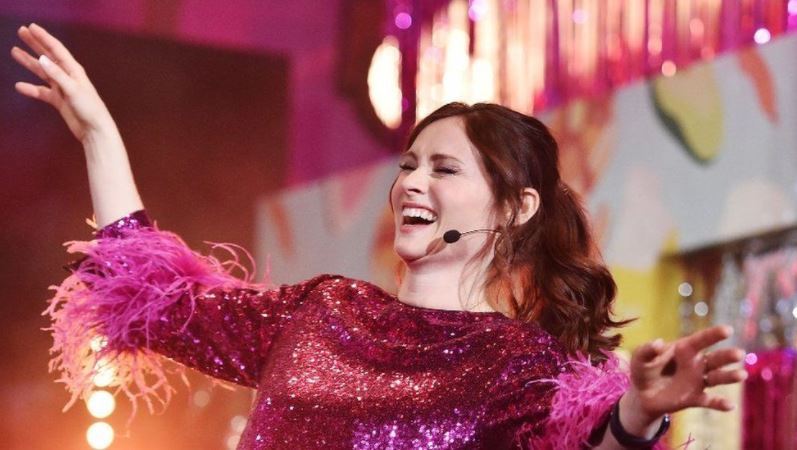 She danced along to the Radio 2 travel news, sang karaoke with Tony Blackburn and changed into a succession of ever-more sparkly dresses.

But she became increasingly tearful as the challenge ended.

"I'm such a mess," she told viewers watching the live-stream on BBC iPlayer. "I can't stop weeping."

The star managed to keep her spirits up throughout the night, but "hit a wall for the first time" as she entered the final hour.

"I thought, 'Oh my goodness, maybe I am going to fall into a heap on the ground'. And then I was like, 'Would people feel sorry for me, or would they want their money back?'"

After a "really good pep talk", she persevered through the final stretch, cheered on by her family

After taking her final step - appropriately to the Abba classic, Dancing Queen - the star sank to her knees.

"I want to thank everybody for giving me the opportunity. This has been really special..."

We are SO proud of you, @sophieEB - you've done it AND you've now reached an incredible £1,009,317! ❤️✨😮 #R2KitchenDisco pic.twitter.com/QyAivfibTn

A former runner-up on Strictly Come Dancing, the star's challenge was streamed live on the BBC iPlayer, as she danced along to tracks by Abba, Beyoncé, Take That and Bon Jovi.

Ellis-Bextor said she chose the majority of the music herself, to avoid a mid-performance slump.

"If I hear something that I don't want to listen to then it's like kryptonite and all my energy will drain into the floor.

"So, the music is my companion, my conscience, my friend."