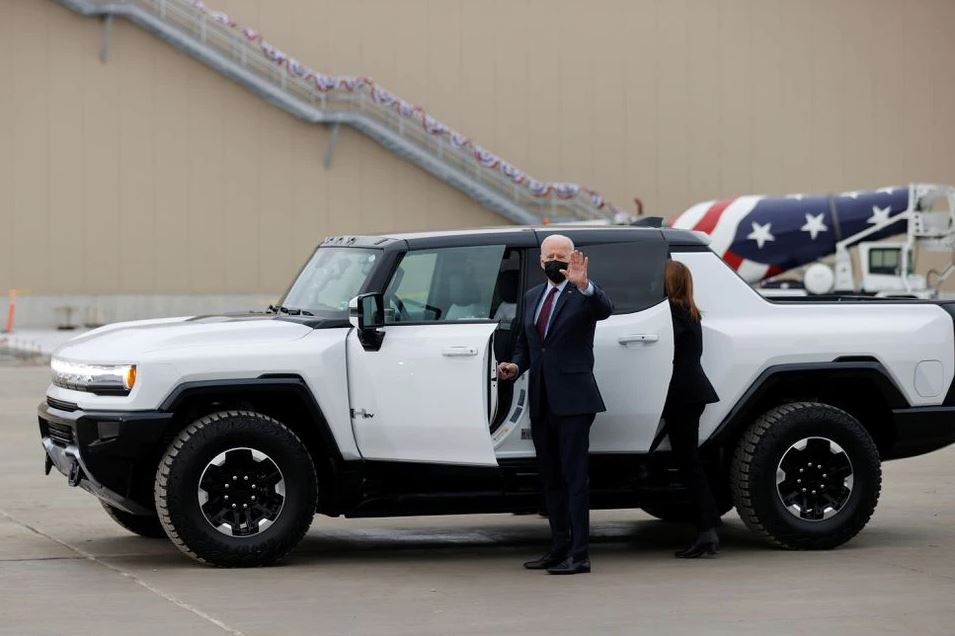 US President Joe Biden climbed behind the wheel of an electric Hummer SUV on Wednesday and sped off with a screeching of tires, in a test drive to tout billions of dollars in electric vehicle investment.

"Anyone want to jump in the back, or on the roof?" Biden asked reporters after taking a few laps at a General Motors plant. "These suckers are something else!"

The test drive, at a General Motors Co (GM.N)electric vehicle assembly plant in Detroit, the largest city in Michigan, was part of a nationwide White House tour promoting the $1 trillion infrastructure bill Biden, a Democrat, signed into law on Monday.

The law provides $7.5 billion in funding to build out the nation's electric vehicle charging network, investments the industry says will inspire more Americans to buy electric vehicles, and manufacturers to produce them. Electric vehicle sales accounted for just 1.8% of the US new vehicle market in 2020.

"In the auto industry, Detroit's leading the world in electric vehicles," Biden said. He did not mention Tesla Inc (TSLA.O), the US automaker that accounts for nearly 80% of US EV sales but is not unionized.

"You know, up until now, China has been leading in this race," Biden said, speaking about EV manufacturing. "That's about to change" because of infrastructure law, he said.

Biden's approval ratings have dropped as inflation increases, and Democrats are promoting the bi-partisan bill as proof the party can deliver in a divided America. Michigan is a key political battleground state in US elections.

NEXT UP, THOUSANDS IN EV TAX CREDITS

Biden also touted his proposed $2 trillion social safety net spending plan being debated in Washington. The bill contains up to $12,500 in tax credits for US-made EVs, including a $4,500 credit for union-made vehicles.

The bill is a key pillar of Biden's domestic agenda but progressive and moderate lawmakers in his party have not yet agreed on what exactly should be in it.

Biden stressed Wednesday the "Build Back Better" bill would be paid for by increasing taxes on corporations, turning to GM CEO Mary Barra to make his point that big companies are not paying as much as they should.

With Americans jittery over inflation and the prospect of a shortage of goods during the holiday season, Biden said he had been assured by executives of Wal-Mart and Target that they would have plenty of items to buy despite supply-chain woes.

"Their inventories are up and they’ll have all the toys, food and other items that shoppers are looking for in the holiday season. That’s going to happen," he said.