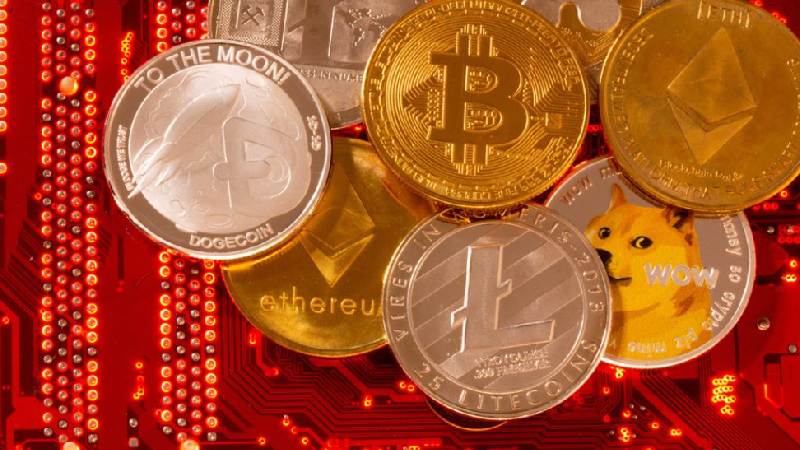 Cryptocurrency market indicators such as average bitcoin funding rates, inflows into crypto investment products and the ratio of old-to-new coins being sold suggest a near-term consolidation for the sector and lower odds of a year-end rally bitcoin bulls are predicting.

Market participants cited profit-taking after bitcoin hit those highs, its increasing sensitivity to global inflation expectations and regulatory headwinds as behind the week's declines.

Concerns that creditors of Mt Gox, a crypto exchange that collapsed in 2014, could liquidate their bitcoin-denominated repayments also weighed on sentiment. read more

In the past week, traders have become less willing to pay to hold long positions in bitcoin futures. Average funding rates, a barometer for sentiment in the perpetual swaps market, have fallen to around 0.008%, according to cryptocurrency analytics platform CryptoQuant, their lowest since early October.

Positive funding rates imply that traders are bullish, as they must pay to hold a long position.

"Do we set new highs before the end of the year? I'd say we've come a long way," said Paul Eisma, head of trading at crypto firm XBTO Group in New York, adding he expected bitcoin to trade between $53,000 and $57,000 for the rest of the year.

Bitcoin's Taproot upgrade over the weekend, its first major update since 2017 that enables its blockchain to execute more complex transactions, was well telegraphed and largely priced in as the asset rallied into the event, market experts said. read more

There is also increased spending of older coins -- associated with long-term investors exiting their positions -- though it remains small in relative magnitude, according to blockchain data provider Glassnode.

A ratio between short-term and long-term bitcoin holders signaled stable equilibrium between 1-week and 1-year old coins, meaning a balanced distribution between newer and older, "smart money" investors and indicating a likely period of consolidation. Tops in price are typically established when large volumes of coins are held by newer investors.

Crypto product inflows have also been subdued in the year's second half, averaging $750 million daily versus $960 million in the first, data from digital asset manager CoinShares showed on Monday.

Still, crypto investment products attracted $151 million in investments last week in their 13th consecutive week of inflows, and total product inflows for the year so far have hit a record $9 billion, according to CoinShares.

"It alludes to the fact that we're also not overheated at the 60K market. There's still a good way to go," Justin d'Anethan, institutional sales manager at crypto trading firm EQONEX wrote in a daily newsletter.

The wider Nasdaq crypto index , which tracks popular digital assets such as Litecoin, in addition to bitcoin and ether, was on track for weekly declines of 9.8%.

Among so-called "meme coins," dogecoin, created as a joke for early crypto adopters and which has surged over 4,000% this year, was up 2.5% at $0.23 on the day, according to CoinGecko, while recently popular Shiba Inu dropped about 17% over the past 7 days.

The total market capitalisation of cryptocurrencies stood at $2.7 trillion as per CoinGecko, down from a peak of over $3 trillion.