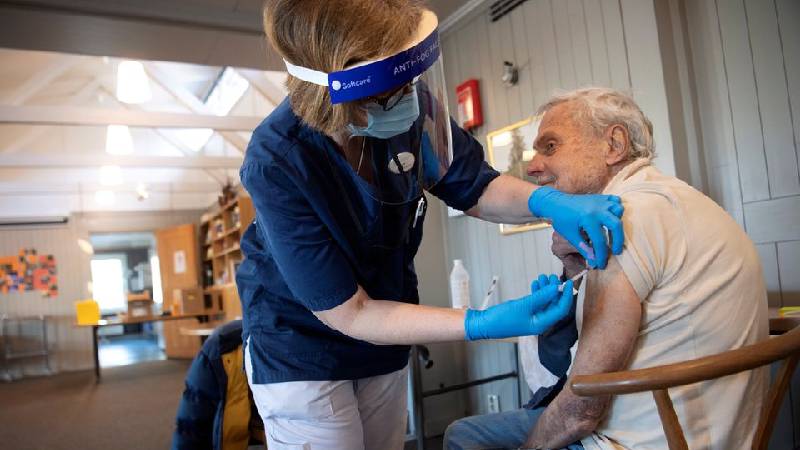 A health worker vaccinates an elderly person with Pfizer's Covid-19 vaccine at a temporary vaccination clinic in a church in Sollentuna, north of Stockholm, Sweden March 2, 2021.

Sweden will begin gradually rolling out Covid-19 vaccine booster shots to all adult Swedes following the surge in cases elsewhere in Europe, government and health officials said on Wednesday.

Booster shots of mRNA vaccine have been offered to people aged 65 or above in Sweden, with an eye to eventually extending the shots to other groups and trying to persuade a still sizable group of uninoculated people to get the vaccine. read more

"We are faced with an uncertain winter," Health Minister Lena Hallengren told a news conference. "You can contribute by staying home if you're sick or by getting vaccinated if you haven't already, and taking your booster when you're offered it."

An exact timetable was not presented. Sweden's health agency said booster shots should be offered six months after the second shot, with a further rollout to risk groups and people aged 50 or above the priority before a gradual extension to all Swedes aged 18 or older.

Hallengren said the health agency had also been tasked with preparing for potential additional measures to curb the spread of the virus after Sweden introduces vaccine passes for indoor events with more than 100 people as of next month.

Sweden abolished nearly all pandemic restrictions as the vaccine rollout reached a large part of the population earlier this year and infection rates remained subdued.

Unlike many of its European neighbours, the Nordic country has so far not experienced a new wave of infections, and hospitalisations remain relatively low, but there have been scattered signs the pandemic is picking up pace again.