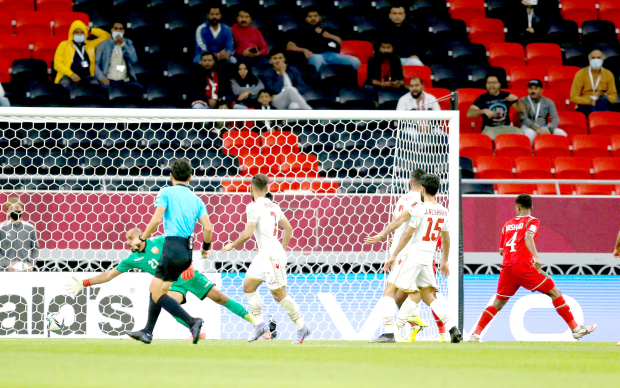 Oman dashed Bahrain's hopes of reaching the quarter-finals of the Fifa Arab Cup with a 3-0 victory at Ahmad Bin Ali Stadium last night.

The win took Oman’s tally to four points and their cause was helped by Qatar’s beating of Iraq by a similar margin last night.

In the second half, Oman added the second goal when Arshad Al Alawi's header inside the area entered from the right side of the net.

Oman joined Qatar, Morocco, Algeria and Egypt who clinched their places in the knockout phase of the tournament.

Lebanon and Sudan crashed out of the race after suffering back to back defeats in Group D.

Meanwhile, Tunisia and the UAE also sealed places in the knockout stage.

The UAE were strong favourites to advance having won their opening two group matches, while Tunisia’s hopes had been dented after a 2-0 defeat to Syria in their second tie.

Tunisia made the perfect start to their match against the UAE at the Al Thumama Stadium, with the team taking a 10th-minute lead.

Captain Youssef Msakni surged into the UAE penalty area after dribbling past several challenges, before being felled by goalkeeper Eisa Khalid.

The loose ball was seized upon by Seifeddine Jazir, with the striker tapping into an empty net.

Tunisia were unable to extend their lead despite several efforts on the UAE goal, but were able to seal a narrow 1-0 victory.

The result saw Tunisia leapfrog the UAE to top the Group B standings, with both teams advancing on six points.

Syria threw away a qualification ticket that seemed in their grasp after conceding a shock 2-1 defeat against bottom-side Mauritania.

And while they were attacking en masse to grab a winner, Hemeya Tanjy scored a killer in the 90+4 minute to seal the first and only points for Mauritania in the tournament.