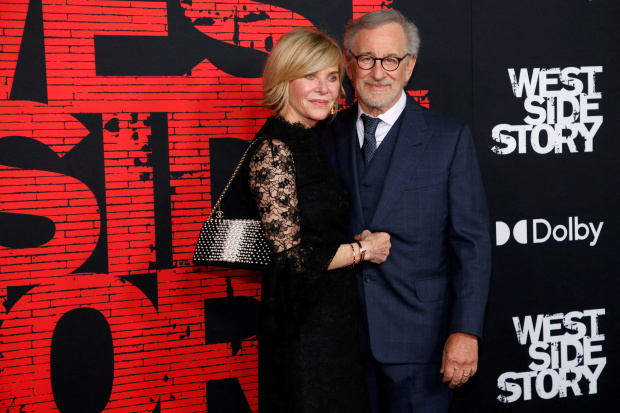 FILE IMAGE: Kate Capshaw and Steven Spielberg at the premiere for the film West Side Story. Los Angeles, US December 7, 2021. Reuters Photo

LOS ANGELES - Audiences didn't open their wallets to see the infamous rivalry between the Sharks and the Jets play out on the big screen.

"West Side Story," Steven Spielberg's remake of the classic musical, fell flat in its box office debut, collecting a paltry $10.5 million from 2,820 theatres. That's cause for concern because Disney and 20th Century Studios spent $100 million to revive the Shakespearean love story for modern times and stand to lose millions, unless "West Side Story" endures at the box office through the holidays and Oscar season.

It may be possible to attract moviegoers between Christmas and New Years, but it's a bad start for one of the most critically acclaimed films of the year -- and one that opened exclusively in theatres. Though every new movie musical has struggled to entice audiences in Covid times, it's worrisome for both theatre operators and traditional studios that "West Side Story" -- one of the most beloved stories in musical theatre history and under the direction of Hollywood's most commercially successful filmmaker -- sold fewer tickets than "In the Heights" ($11.5 million debut), a lesser known song-and-dance property that premiered simultaneously on HBO Max. "West Side Story" at least earned more than Universal's "Dear Evan Hansen" adaptation, which premiered to $7.4 million in September while playing exclusively in theatres. But that's not exactly a high bar considering "Dear Evan Hansen" was skewered by critics. However, "In the Heights" and "Dear Evan Hansen" cost far less to make than "West Side Story."

"In the past, we've seen musicals connect with critics and audiences and go on a run," says David A. Gross, who runs the movie consulting firm Franchise Entertainment Research. For example, "Chicago" opened to $10.8 million in 2003 and ultimately earned $170 million, while more recently, "The Greatest Showman" debuted to $8.8 million and kept chugging along until revenues hit $170 million.

"But that was then, and this is now. Moviegoing conditions remain impaired," Gross says. "If 'West Side Story' is going to be profitable, it will need to connect internationally as well domestically."

After October set pandemic box office records, thanks to "Venom: Let There Be Carnage" and "No Time to Die," movie theater attendance has taken a downturn. That will change next week when Sony's comic book sequel "Spider-Man: No Way Home" hits cinemas. What remains clear, however, is that older audiences haven't been eager to return to the movies. Most of the tentpoles that have been commercially successful have been catered to younger males.