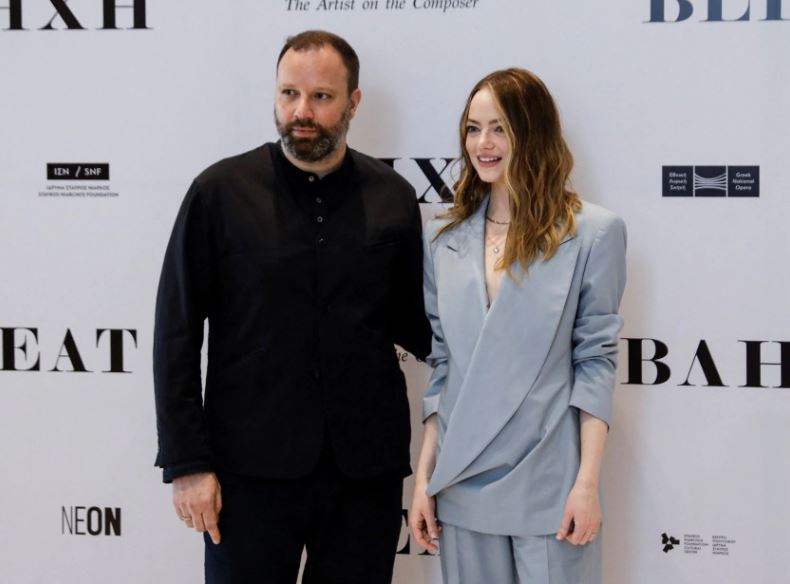 Director Yorgos Lanthimos and actress Emma Stone pose for a picture before the screening of 'Bleat' at the Stavros Niarchos Foundation Cultural Centre, in Athens, Greece, May 5, 2022. (Image credit: Reuters)

Four years after joining forces in a period drama, award-winning American actor Emma Stone and director Yorgos Lanthimos have reunited on a project that harks back to cinema's golden age - a short silent movie shot in black and white.

Filmed on the Greek island of Tinos in 2020, 'Bleat' explores the cycle of life and death centred on a local couple, played by Stone and French actor Damien Bonnard.

Describing the movie as a challenge, Stone told reporters ahead of Friday's Athens premiere: "I just immediately wanted to do it."

In the tradition of the pre-talkie age, it draws heavily on her facial expressions and features traditional Greek island images and a score that will be played by a live orchestra during its three days of screenings in the Greek capital.

Lanthimos - who worked with Stone on 2018's 'The Favourite', an academy award-nominated black comedy set in the British court of the early 18th century - is no stranger to the unconventional.

"The way I try to create is to just be true to what my thoughts are at any given moment and not think of serving some kind of purpose," he said.

Describing the "dirt in the face" burial scene as the most challenging part of the shoot, Stone added: "Was it the artiest thing I’ve done? I guess so."

Stone and Lanthimos have also collaborated on the upcoming 'Poor Things', described as a Frankenstein offshoot.

"We are very opposite in many facets of our personality so it's a nice balance for me, and I feel very safe with him and challenged by him," said Stone of their cooperation.

'Bleat' was commissioned by the Greek National Opera and a scheme by cultural organisation NEON connecting the work of artists and filmmakers with live orchestral music.

Its score, based on works by JS Bach, is by Knut Nystedt and Toshio Hosokawa.

Asked if she feared death, a recurring theme in the film, Stone said: "I am not afraid of death, no, I am afraid of dying, but death itself I don't feel afraid of, strangely.”